Oh, looks like Warhammer Community has a new post on War Zone Ultramar. Sorry for being late to the party. I'm busy.

Just so you guys know, I probably will not be able to update my blog tomorrow or Friday because I will be spending about 28 hours in flight. Yeah, I'm returning to Singapore from Minnesota on Thursday morning, way before the Warhammer Community post their daily updates. I've been packing and stuff, and updating my stories (sorry, not Warhammer 40,000 stories, they're stupid, juvenile anime-styled stories that emulate light novels and web novels) so I've been behind. Anyway, expect the next update to be on late Friday night or on Saturday. I apologize for the inconvenience. That said, hardly anybody reads my blog, except maybe Jesse, and all the Tyranids stuff is done, so there shouldn't be a problem.

So Ultramar is a sector that contains hundreds of planets and is the jewel of the Imperium. It's one of the few places that can actually be called prosperous or counted as progressive and utopian. Basically a rare paradise within the Imperium or the 41st Millennium in general. Unfortunately, all that is set to change in 8th Edition.

War has come to Ultramar. The Death Guard and their legions of Plague Marines and hordes of Nurglings are poised to invade Ultramar. Already three systems to the galactic north of Ultramar have fallen to Nurgle's forces and turned into the Scourge Stars. With that done, Nurgle proceeds to invade Utramar.

Well, I don't play Ultramarines, but that makes for a good opportunity for my own storyline there. Yay. Anyway, there are 500 worlds in the sub-empire of Ultramar. Awesome.

Uh oh. So the legions of Nurgle, led by the Death Guard, are invading Ultramar. Fortunately, Roboute Guilliman and his Primaris Space Marines have returned to save the day. Yay. That's the premise for Dark Imperium. Sounds pretty cool, doesn't it? So if you're interested, get the Dark Imperium box set soon and wage epic wars between Ultramarines (with Primaris Space Marines) against the nefarious Death Guard!

Wait, so what does that have to do with the forces of the Draconis system?

That's where the Imperial Guard tank regiments of the Draconian Armored Force and the Imperial Knights of the nobles hosues of Draconis III (House Yato, House Uesugi and House Takeda), plus a whole bunch of Adeptus Mechanicus and their escoring maniples of Skitarii, come into play. To aid Lord Commander Guilliman in his war against Traitors and Heretics, the Draconian Fleet has warped in from the direction of the Scourge Stars to retake one of the three systems. Once they succeed and cleanse one of the systems free of taint and disease they will proceed to meet up with the Primarch Guilliman in Ultramar sub-sector for a devastating pincer attack to crush the invading Nurgle legions.

Something like that. I'll wait for more details from 8th Edition and more fluff before I write the story (too busy with writing my stupid web novels for now). But yeah, it'll be about the might of the Draconian military, bolstered by the Leman Russ tanks of the Imperial Guard and spearheaded by the noble Imperial Knights against the diseased tenacity of the Death Guard and legions of Nurgle.

As such, they do not view the flesh as weak, but rather as a superior form of machine. This leads to dark research bordering on tech-heresy as the Genetors of Draconis IV often strive to genetically modify organisms in order to augment their abilities in combat. There are rumors that they are attempting to recreate the Primaris Space Marines that Belisarius Cawl created in Mars, but from the lack of presence of such things, it doesn't seem that they have succeeded. Oh well. 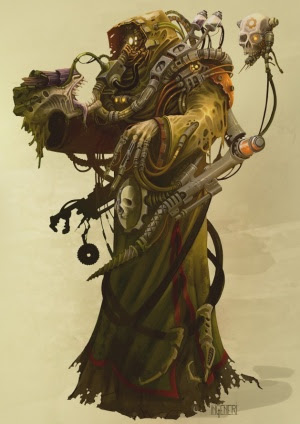 Of course, there are several branches of Genetors who wish to experiment on the Tyranids and enslave them to their control much like the Anphelion disaster, but the Great Rift and invasion of Traitor Astartes have interrupted those efforts and the resources of the Divisionis Biologis have been diverted to finding cures and stemming the tides of diseases and plagues the forces of Nurgle bring. They have far more success with that, which is why they are confident enough to accompany the Imperial Knights and Imperial Guard of Draconis III to take back the Scourge Stars from the Death Guard and Nurgle. They have found serums and vaccines that would protect the human soldiers from diseases and they continue to research innoculations against ever mutating strains of Nurgle. Seems like their experiments on the unrivaled mutability of Tyranids have paid off here. Heh.

Anyway, we shall see. It'll be fun to see the Imperial Guard fight alongside enslaved Tyranids one day, but who knows? I mean, we did that in Starcraft where the United Earth Directorate succeeded in enslaving the Overmind to field Zerg forces, so maybe we'll eventually be able to do that in Warhammer 40,000.
Posted by Tanaka Tomoyuki 田中友幸 (Real name: Tobias Fong) at 5/31/2017 02:35:00 PM