Sorry for the slew of posts, I forgot to write about this yesterday. I mean, I'm still in the midst of reading the Ahriman Collection, so this actually means a lot to me, as a fan of the Thousand Sons.

Yeah, we're getting a new Thousand Sons novel. A Horus Heresy novel, to be specific, but about the Thousand Sons after their flight from doomed Prospero and into the Planet of Sorcerers.

Graham McNeill has written The Crimson King: A Soul Divided, which is slated for a June release. June 3rd 2017, to be precise. It's up for pre-order now, so I can't wait.

Basically here is the main synopsis:

THE STORY
After the razing of Prospero, Magnus the Red spirited the Thousand Sons away to the aptly un-named Planet of the Sorcerers, deep within the Eye of Terror. Removed from the concerns of the galaxy at large and regarding the Warmaster’s unfolding Heresy with cold detachment, he has dedicated his hollow existence to the preservation of all the knowledge once held in the great libraries of Tizca, should mankind ever seek such enlightenment again. But his sons can see the change in their primarch – he is a broken soul, whose mind and memories are slipping away into the tumult of the warp. Only by returning to the scenes of his greatest triumphs and tragedies can they hope to restore him, and allow the Crimson King to be crowned anew by the Ruinous Powers.
Written by Graham McNeill

Sounds awesome to me. I can't wait to read it. Hell, I'll go pre-order it now, like the loyal Thousand Son that I am. I bet this is the story where Ahriman conducts a ritual to combine the many fragments of his father's soul - this was alluded to in Ahriman: Unchanged. Yeah, I've just finished reading Ahriman: Unchanged and I'm reading Ahriman: Exile right now, which interestingly enough is written from the point of view of Ctesias. But anyway, it was mentioned there (spoilers, so skip this paragraph if you don't want to be spoiled) that Magnus's soul had fragmented, and Ahriman being the loyal and prodigious son that he is, went and collected and combined most of these fragments back together. However, his ritual was flawed and he didn't actually succeed. There were still cracks in Magnus's recombined soul, and a single fragment - alluded to be the fragment of wrath - wanted to dominate the other fragments in the second Rubric that would combine these fragments together. Fortunately, that did not come to pass, and the more "rational" (if you can call it that) aspect of Magnus subsumed the Wrath aspect. Or something like that. 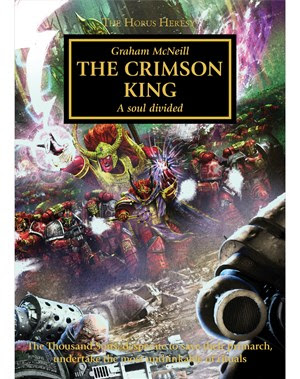 There's also a key thing that Magnus said at the end of Ahriman: Unchanged that caught my attention. He was telling Astraeos that vengeance makes one weak. Does that mean he's no longer going to focus on vengeance against the Imperium (and the Space Wolves) and instead focus on the greater cosmic game? I mean, he did wreck the Fenris system and all in the Wrath of Magnus, but in the end he let the Wolves live because he had more sinister agendas in mind. Such as bringing the Planet of the Sorcerers to reality, and stuff. We shall see.

Anyway, it's up for pre-orders, so if you're a Thousand Sons fan, you probably don't want to miss this. As usual, I'll write a book review for it when I'm done. I'm close to finishing the Ahriman Collection, so you could probably expect a book review for that book...soon. I hope. Emperor willing.