The Ahriman Collection is amazing. That's all I can say. Thumbs up. I mean, I was worried when I saw that it was written by John French because I was not particularly impressed by his Tallarn: Ironclad (you can probably find my book review on that somewhere on my blog), but his Ahriman Collection just blew me away. 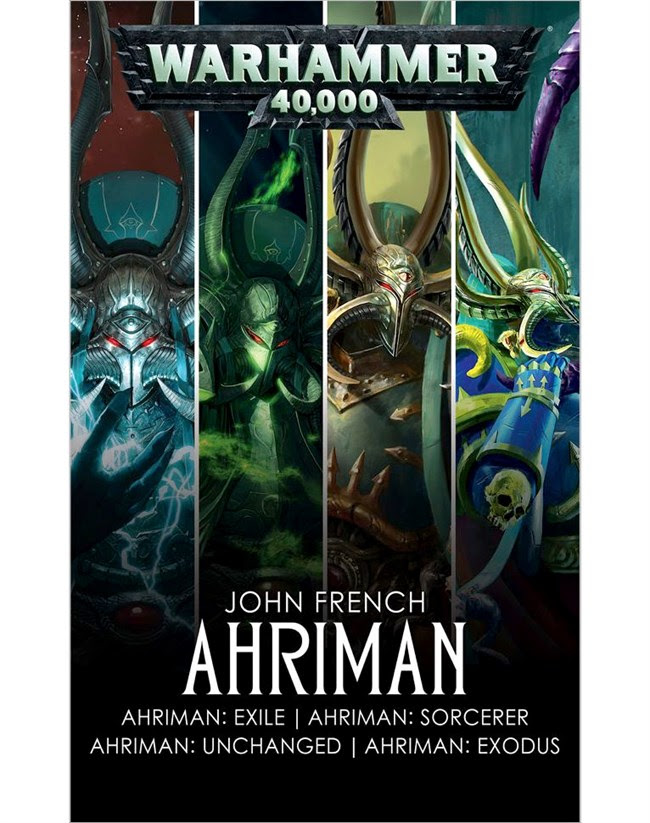 Let's begin with Ahriman: Exile. It begins as a nice book, and I was sort of surprised when Ahriman disguised himself as a sorcerer amidst the Harrowing, a Chaos warband of some sort. Needless to say, the Harrowing was eventually wiped out when Tolbek and a couple of Rubricae came onto the Harrowing's main ship and wiped them out. Ahriman then allies himself with Astraeos - who's one of my favorite characters in the Warhammer 40,000 universe, and what remains of Astraeos's chapter - Kadin, Thadias, and Carmenta, the mistress of the ship, Titan Child. There's also Maroth, who's written well as an antagonist. Long story short, Ahriman finds himself chased by Amon and his followers, and he leads Astraeos and friends on a long escape as well as a journey to find clues on who's chasing him. This leads him back to Amon and the Thousand Sons, and while Ahzek Ahriman is kind of..."I don't want to get involved with the Thousand Sons again because my mistake destroyed my own Legion" he eventually kills Amon and takes up command over Amon's army. Titan Child was destroyed, but Carmenta gains a new ship, the Sycorax. Yay. The first book is pretty cool, and I was introduced to amazing characters such as Astraeos, as well as Selandra Iobel the Inquisitor, and while they seem unrelated, they are tied together over the course of the trilogy.

I can't say I actually liked the first book that much. I mean, Ahriman spent most of it a wimp, for a lack of a better word, running and hiding and refusing to do...well, something. But by the end of the book, he sort of unleashes his sorcery powers and destroys Amon. I was going hell, yeah!

Another thing that I really like about the first book was how John French differentiates Ahriman from the Harrowing, and in effect, most Chaos Space Marines. Ahriman is a sympathetic character. Yeah, he starts off a bit...um, pathetic, but you can truly relate to the guy and sympathize with him. He reminds me of myself. His life is filled with nothing but disaster and failure, tragedy and misfortune, of course any guy would want to run and hide. While he is sympathetic, don't get me wrong, Ahriman is not a nice guy. He's not above sacrificing people to get what he wants. What I do like is how he seems more honorable and idealistic than the Harrowing, and how he's much less extreme. The Thousand Sons seem one of the more reasonable Chaos Space Marine Legions, and it shows here. They don't torture for fun, they don't kill for the sake of it. They do so out of necessity - yeah, they're not good guys, but they aren't over the top evil and one dimensional either. If anything, the whole tragedy behind the Thousand Sons - and that behind Ahriman - gives depth and adds layers of complexity to a very well thought out villain.

Now it's the second book, Ahriman: Sorcerer that I absolutely love. This particular novel is what makes Ahriman stands out as a villain and portray him as the arch-sorcerer of the Thousand Sons. This is where all the scheming and stuff comes together. Sanakht plots and schemes against Ahriman and all the while I was laughing because somewhere in the back of my mind I was imagining Ahzek Ahriman to be Yagami Light and everything going "just as planned!" I mean, come on. Ahriman was Corvidae, a Diviniation Psyker who could see the future (though admittedly I was reading the Ahriman Collection off the back of The Razing of Prospero). How could he not have seen Sanakht's betrayal coming? Of course he would.

Another thing that I absolutely love about Ahriman: Sorcerer was the mindfuckery that came with the time travel of the Warp and stuff. Big spoiler ahead: basically, Astraeos learns that his chapter was destroyed by the Inquisition and the Grey Knights because when he and the survivors escaped through the Warp, they accidentally went back in time to meet Ahriman. So when he was captured by the Inquisition as part of Ahriman's plans (Ahriman giving him a chance to enact revenge on the Inquisiton), the Inquisiton ended up identifying his chapter, and send the Grey Knights and their forces to destroy Astraeos's home planet and chapter. Terminator cause-and-effect at work here. That was just wow. I did not see that one coming. I saw the Ahriman chuckling, "just as planned!" for Sanakht's betrayal and turning the tables on the poor guy, but I definitely did not predict the whole cause-and-effect thing for Astraeos. It kind of drove home the parallel between Astraeos and Ahriman - both of them betrayed by the Imperium because of forces beyond their control, and stuff like that. I was sad when Astreaos became Oathtaker and swore vengeance on Ahriman, but I couldn't blame him.

Ahirman: Unchanged tied up everything together, and has Ahriman return to the Planet of Sorcerers to cast the second Rubric. Now I get introduced to another awesome character. Ctesias is awesome, he's a summoner. Ignis is cool, and Credence the automaton is also pretty cool. I did like Ignis back in Ahriman: Sorcerer but he was cool as the Master of Ruin. However, Ctesias brings a whole new angle to the story and new perspective. In the past, it was the Word Bearers Legion who specialized in summoning daemons, but now we have a Thousand Sons sorcerer who does it! I can't wait to see what new rules I can get for him. Anyway, the story is pretty standard fare, but it doesn't have any of the twists and awesome shennigans that Ahriman: Sorcerer had. It did hint at a larger picture, and Magnus himself is revealed to have been broken into many different fragments and manipulating the whole thing from behind the scenes. The Changeling was...pointless. I've absolutely no idea what's the point of throwing the Changeling in there. But who cares? What I did like was Astraeos being the Oathtaker and owning other Thousand Sons sorcerers. As expected of Ahriman's protege! I was kind of sad he just wandered off in the end. Perhaps I should write a story where Ahriman took him back in with the rest of the Exiles when Magnus lifted the Banishment. But hey, whatever.

The war between the Exiles and the "Loyalist" Thousand Sons was pretty awesome, and I like Ctesias unleashing daemons after daemons on the poor Planet of Sorcerers' defense. Oh well. I'm guessing the braying mutants in John French's novel must be the Tzaangors, because they show up a year after his last novel was published. Hmm...

Oh, and while I was kind of sad when the second Rubric failed - I mean, I really rooted for Ahriman - I was kind of pleased when Helio Isidorus was restored. Oh well, better than nothing.

Anything else? Ah. Ahirman: Exodus. Unlike the other three novels, Ahriman: Exodus is a collection of short stories. I like the short stories, especially Ctesias's short stories. He also expanded a lot on Astraeos, and I like how loyal Astraeos was until his revelation and betrayal. Oh well. May Astraeos join Ahriman again. Maybe he survived and became a Thousand Son under Magnus, and returned to Ahriman's command after the Banishment was lifted. Who knows?

Ctesias's short stories expand on how Ahriman is not a nice guy, basically, making him do all the dirty work. So just in case you start thinking that Ahriman is not so bad after all, Ctesias shows up, and bam! waves a big journal into our face telling us how much Ahriman is a jerk for forcing him to do stuff. The Helio Isidorus short story was cool, as was the Ahriman and Magnus short stories, but they don't really do much...I guess. I just like the trilogy and Ctesias's adventures. Being a daemon summoner is so cool.

No, no! Don't do it! It may be cool, but it's heretical and highly dangerous! Ctesias suffered tremendously, so take him as a warning and DO NOT do it!

Anyway, I'll recommend you guys to get the entire Ahriman Collection. Yes, even Ahriman: Exodus is worth it, make sure you read Ctesias's side of the story too! And we need more Astraeos!
Posted by Tanaka Tomoyuki 田中友幸 (Real name: Tobias Fong) at 5/10/2017 09:32:00 PM