Kingsblade by Andy Clark is awesome. That's all you need to know. Seriously. Buy it now, especially if you're a fan of Imperial Knights. It's a MUST BUY for all Imperial Knights fans and players who are interested in the fluff. It's even better than Graham McNeill's Knights of the Imperium. Seriously. 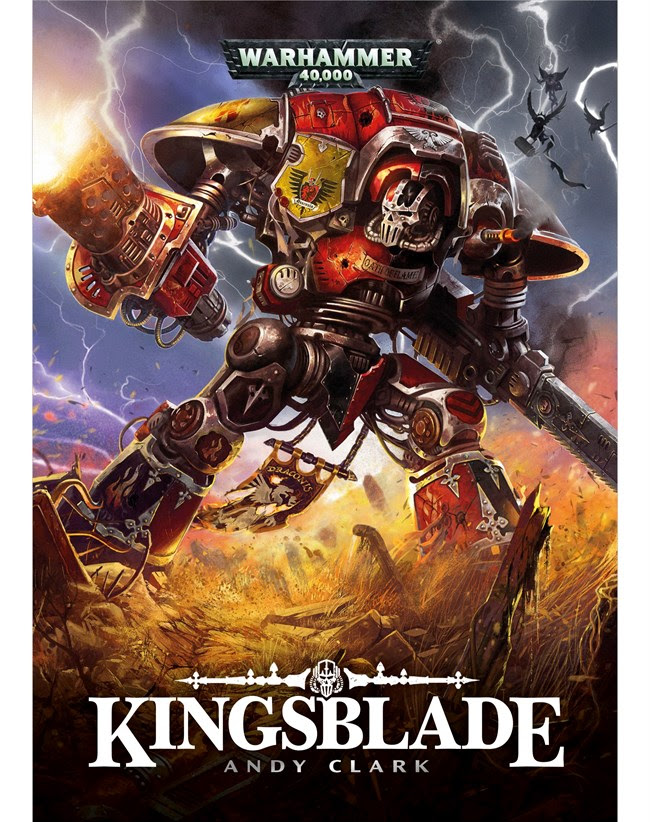 What are you waiting for? Go to Black Library and order it now. That's an order.

Okay, never mind. You're here for a book review, so let me take it more seriously. First up, Kingsblade provides a very detailed and intensive look into how Imperial Knights work. You have the entire hierarchy, the heralds, the High King, the various Houses and the nobles. They work as actual Knights, with the pilots being addressed as Sire and Lady. How cool is that? They show how the politics work. Unlike Knights of the Imperium, Kingsblade focuses less on the consorts, or the Knights' wives. There are still politics, but it has more to do with the High King and royalty in garnering loyalty from the other Houses.

The protagonist is Danial Tan Draconis. Yeah, it's a gigantic coincidence that Danial is a Knight of House Draconis, when my own Imperial Knights are from the Draconis system, but they're of House Yato instead of House Draconis. Anyway, there are 5 Knightly Houses of Adrastapol. You have House Draconis, which is where the High King Tolwyn Tan Draconis belongs to. Danial is the Kingsward and his son, basically heir to the throne. Then there's his sister Jennika, who is an awesome Knight, more awesome than Solaria (hah! Pathetic) in Dawn of War 3. The Herald Markos serves as the old guy with gigantic balls, nerves of steel and vast experience. You know, the seasoned veteran who knows more about war than everyone else. I'll mention Suset Dar Draconis, who funnily enough is hinted as Danial's love interest. Although they haven't officially gotten together at the end, it's hinted that Danial will take her as his Queen eventually. I'll probably do that if I write about them, but hey, House Yato has their own story to tell.

There's House Wyvorn, but nobody cares about them. And then there's House Pegasson and House Minotos. Both of which are very cool. These five Houses are located on the world, Adrastapol, which is located in the Majestis System. The High King apparently rules over this system much like how Roboute Guilliman rules over the 500 worlds in Ultramar System. Don't forget about their Imperial Guard allies!

We have the Cadians, which are as awesome as always. Following the Cadians are the Mubraxis and Tanhollis regiments. Tanhollis isn't mentioned muched, but Mubraxis is pretty cool because of their leader, the Mubraxian Sheik Halna'sir, who basically did several awesome things in this story. I won't spoil it for you, but he's basically the guy who pulls the Imperial Guard regiments together and contributed greatly to the Imperial victory (yeah, the Imperium wins this one, sorry for the spoiler, but what do you expect?). The Cadians are led by Major Kovash, and Cadians being Cadians, they supported the Knights of Adrastapol with honor, duty and committment. Yay!

In addition to the Imperial Guard, we have Commander Korgh who is in charge of the Planetary Defense Force of Donatos, which is the world the Imperial Knights and Imperial Guard have come to take back from the Traitors who fell to Chaos. Korgh actually turns out to be a likeable fellow that you'll come to root for. That's just how great this book is. All the characters in here, you'll just come to like them. Except the Word Bearers, of course.

Ah, yes. Now we come to the real enemy. The Imperial forces find themselves at war with the Word Bearers, led by the evil Varakh'Lorr...who, quite frankly, is an asshole. Anyway, the basic premise of the story is that the Imperial military forces fight the Word Bearers and Cultists and Traitor Donatians, but suffer a massive setback through twists and turns. I mean, it'll be boring if the Knights of Adrastapol just smash through the Traitor's forces and win right at the beginning of the book. Danial finds himself in a position of leadership, Luk finds his loyalties tested, a Freeblade is born, awesome battles between Knights, as well as between Knights and Daemon Engines are abound! The Knights are not invincible, and they shouldn't be, but they are depicted as powerful and awe-inspiring, as they should be. Andy Clark does the Imperial Knights justice with this narrative, weaving a spellbinding plot with enough twists and turns to keep you guessing, and with great, lovable characters that you can relate to - even if they pilot a titanic bipedal machine of war - and root for.

As I said, this book isn't a buy. No, it's a must buy. You'll never regret reading it. You'll love it. I guarantee it. If you don't...well, I guess you aren't a fan of Imperial Knights, so if colossal bipedal mechs aren't your thing, you might not find this to your liking. However, I daresay that even if you don't like giant robots or mechs, you'll still come to love the characters, the politicking, the twists and turns, and the epic battles and strategies that permeate the tale's tapestry.

Knights of Adrastapol! We march!

Sorry, I mean Knights of Draconis! We march! House Yato, House Uesugi and House Takeda shall saddle forth to war alongside our Knightly brothers! And Imperial Guard allies!
Posted by Tanaka Tomoyuki 田中友幸 (Real name: Tobias Fong) at 5/23/2017 10:40:00 AM