Move over, Super-heavies! Now we no longer have Super-heavy or Gargantuan Creatures. Instead, we affectionately call these large models...well, large models.

Here's the post from Warhammer Community about large models!

To give you a quick rundown, basically vehicles have become Monstrous Creatures in terms of profiles. So no more Hull Points, Armor Value, etc. Instead, vehicles now have Toughness, multiple wounds - many more wounds than Hull Points! Whoopee! - and even an armor save! They get Strength too but I don't know how the heck my Leman Russ tanks are going to make use of Strength when they probably have a WS of -. Whatever.

The new edition has eliminated the specific rules for Super-heavies and Gargantuan Creatures. So no more Feel No Pain, no more Poison wounding only on 6+, and no more unaffected by vehicle damage table! Instead, the vehicle damage table will be replaced by a new mechanic - more on that later. For one thing, we no longer have to worry about losing our tanks to an Explodes! result or see more than half of my Imperial Knight's hull points shaved off by a single melta shot! I don't know what's going to happen to Stomp, that's going to be a pain to lose. Boohoo.

It also means the units that sat just shy of Super-heavy status and missed out on those rules will now be much stronger and durable. We're looking at you, Morkanaut and Gorkanaut. Oh, and Magnus probably benefits from this too because he's no longer a Gargantuan Creature that's not a Gargantuan Creature.

Furthermore, all these large models have their Wounds bumped up to eleven! The biggest Tyranid monsters now have over a dozen wounds. Better news. My Imperial Knights now have more than 20 Wounds each! Talk about awesome! I can't wait to field my Imperial Knights with their new statline and profiles! Losing Stomp hurts, and probably the new damage thing that will reduce their effectiveness when they lose lots of wounds will also hurt too, but that's a small price to pay. I bet their cost will be suitably adjusted and they won't be, say, more expensive than a Wraithknight which is actually a lot more powerful. -___-

Thanks to the scrapping of Strength D weapons, we don't have to worry about anything shooting them and killing them with one shot thanks to rolling a lucky 6. Yeah, my Imperial Knight is going to survive even if a Wraithknight shoots him with that overpowered Strength D Wraithcannon or whatever and rolls a 6. Phew. I still remember that awful game where a Wraithknight basically wiped out a Stormblade on the very first turn when he rolled 6 with his Strength D weapon. Ugh.

You can probably see the new mechanic in the link, but to sum it up, the more damage these large models take, the less effective they become. For example, we have a Morkanaut who probably shares the same statline as a Gorkanaut. Anyway, it has Toughness 8 and 18 Wounds (wow). Right now, you'll see *s for its Movement, Weapon Skill and Attacks. Otherwise it has a Ballistic Skill of 5+, Strength 8, 18 Wounds, Leadership 7 and a 3+ armor save no matter what.

Now I wonder how this will work for my tanks. Never mind Leman Russ tanks, what about Imperial Knights? How about repair? Let's say I've a Tech-priest Dominus or an Enginseer following my tanks and Imperial Knights around. Do they restore multiple wounds with each successful repair roll? In 7th Edition, they can only restore 1 Hull Point per sucessful repair roll. How will the repair mechanic work now? I mean, it'll be absurd to only restore 1 Wound per successful repair roll because the repair mechanic will almost be useless if my Knight loses, say, 6 Wounds at one go. My tech-priests will not be able to keep up with the damage! And what about Leman Russ tanks? 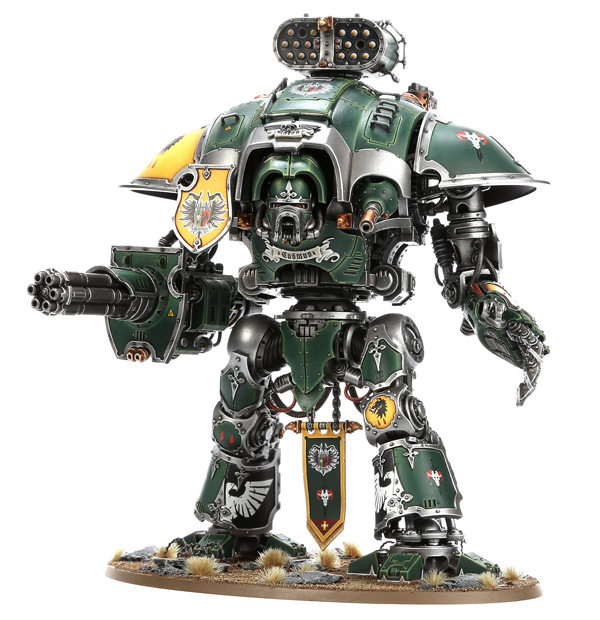 I don't think we'll ever find out until 8th Edition, because tomorrow Warhammer Community will be talking about infantry instead. Maybe we'll get to see Guardsmen's profiles and statlines tomorrow! Emperor willing, I mean. So stay tuned for more!
Posted by Tanaka Tomoyuki 田中友幸 (Real name: Tobias Fong) at 5/07/2017 01:47:00 PM