Not going to say much since you can pretty much read everything in the original in the link above. I guess I'll be saying how this affects the Draconis system.

The Imperial armies of the Draconis system will play a major role in the Indomitus Crusade. The Draconis system was fortunate enough to remain on the "good" side of Segmentum Solar, but legions of the Draconian Armored Imperial Guard regiment will be sent both to Armageddon sector and launched on a crusade to reconquer Cadia. Cadia, after all, remains a talismanic prize that the Imperium dearly loves to reclaim. 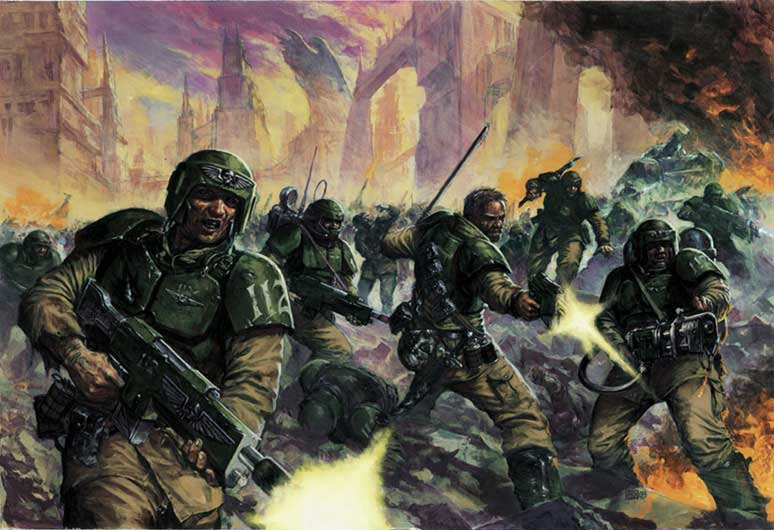 Just read about Cadia here, if you don't believe me. The Imperium has clearly not abandoned Cadia, and it has not fallen.

Cadia
The fortress world of Cadia Prime - once the keystone of the Imperium's defence against the Chaos hordes of the Eye of Terror - was smashed into submission by Abaddon the Despoiler. Its ruined remains still lie at the heart of the Cadian Sector, a talismanic prize that the Imperium would dearly love to reclaim.

I'll probably try to put all this in the Mere Mortals story I'm writing in the summer, but basically Draconis is affected by the Great Rift in unexpected ways. Even though the Draconis system is not cut off from the larger Imperium, the great Warp storms and cataclysmic events across the galaxy has awakened dormant psykers in Draconis III. Which means I'll be adding Primaris Psykers to my army. I'll probably use Guardsmen models for my Psykers because I can't say I like the Wrydvane Psykers, but yeah. A squad of Guardsmen psykers, with the company command officer playing the role of a Primaris Psyker. We shall see. I'll do adjustments with spare parts, using weird stuff to do a force stave or something. We shall see.

Anyway, expect more psykers, so yeah...this means the Imperial Guard regiments of Draconis, the Draconian Armor, will have psykers alongside tanks. And the Imperial Knights will definitely feature strongly - House Yato will march alongside the Leman Russ tank squadrons of the Draconian Armor. Adeptus Mechanicus...hmm, I don't know, but I guess the Skitarii will follow too, but they won't play as huge a role, maybe? Anyway, I'll be shifting the conflict toward an Imperium versus Chaos conflict so as to streamline the plot instead of messily floundering between factions.

The Thousand Sons have their eyes on the growing psyker population of the Draconian Armored Force, so that will also play a huge role in my story. Are the Thousand Sons allies with sinister motives (in ther fight against other factions of Chaos), or are they deliberately steering the Draconian forces down the same road of damnation that they once walked? We'll find out. 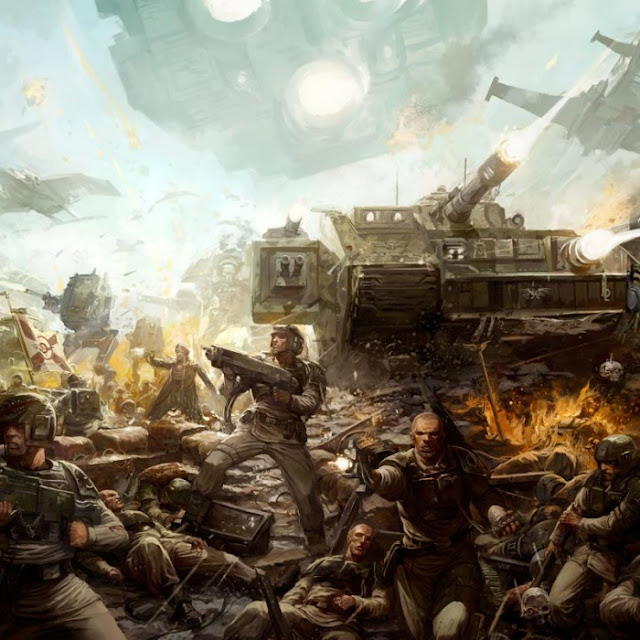 Large swathes of Draconian Armored Force and noble courts of Imperial Knights from House Yato shall march onward to reclaim Cadia in the Indomitus Crusade. Several regiments will be sent to Armageddon, no doubt, but I'll focus on a particular crusade against Chaos. Mere Mortals will feature the brave and valiant Guardsmen of the Draconian Armored and their Imperial Knight allies against the Death Guard and Chaos Daemons of Nurgle on a once propsering agri-world that has fallen to the plagues of the diseased chaos god. Reinforced by the Adeptus Mechanicus and their maniples of cybernetically augmented Skitarii warriors, the armies of the Imperium will attempt to reclaim the sick and dying world from the clutches of Grandfather Nurgle. Unknown to both sides, the Thousand Sons watch and wait, their enmity against Montarion for speaking out against their Primarch, Magnus, during the Council of Nikaea still simmering beneath the surface.

As these five great factions collide, a secret buried deep within that world will be revealed for the first time in millennia...
Posted by Tanaka Tomoyuki 田中友幸 (Real name: Tobias Fong) at 5/04/2017 05:26:00 PM