I finally finished painting my Black Templars and several of my Imperial Guard. I had a bunch of new Sentinels, so I painted two of them. While painting the Armored Setinels, I also decided to add a new paint scheme to my Leman Russ Executioner tanks. It ain't Imperial Guard without Castellan Green, after all, and the black paint scheme was a bit too plain, so I decided to add a bit of green to color things up.

In any event, I now have a small Black Templars force to go along with my Imperial Guard Crusade (or Imperial Knights, depending). The only thing I have left is the infantry squad for my Imperial Guard. Not only that, I'll probably grab myself a Gladiator Lancer tank for my Black Templars (because I love tanks). We'll see. I don't know if I'll add Relic Terminators or make this an all Primaris force, but as October draws closer, I'll take my time to decide.

Black Templars! CHARGE! Why Black Templars? Well...because I've recently been reading the Beast Arises series, along with Black Legion, and Sigismund's stories from the Horus Heresy. So I kind of decided to go with them because I like their Knight scheme and the way they just charge into combat. Heh.

So I managed to obtain a Strike Noir Gundam, along with a Blaze Zaku Phantom. I originally intended to get the Blaze Zaku Phantom so that I could do the whole Cerberus Zaku Phantom, but the silhouette wizard packs don't fit. The joints at the back do not match. What a disappointment. I don't know what to say. 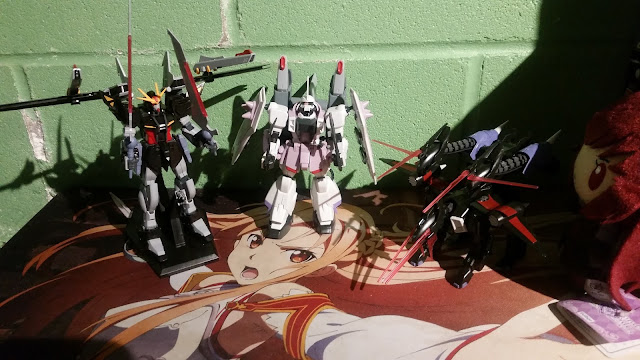 On the other hand, the Strike Noir is a gorgeous model. Love the Strike Noir Gundam. He looks so cool! Best of all, he's black, so he also matches my black Cerberus Bucue Hound. These are my two favorite Gundams! Well, I dunno if the Cereberus Bucue Hound counts as a Gundam, but whatever. They look cool and that's all that matters! 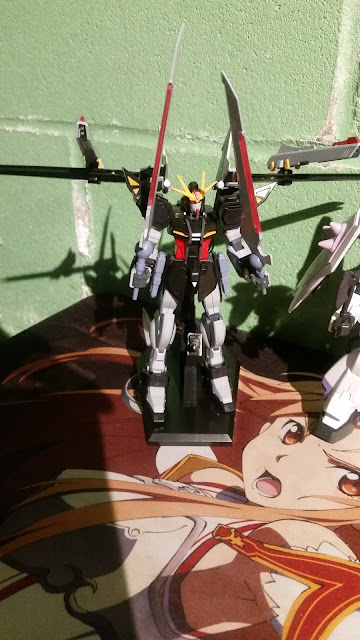 Tomorrow I will return to Warhammer 40,000. I was getting Gundam models because I wanted to use them as reference for my mecha story, but my mecha story has fizzled out and was cancelled because it had no "commercial value." So I was advised to give up on it. I didn't really like it, though. I'll return to it another time and start it from scratch rather than try to rewrite an existing draft. 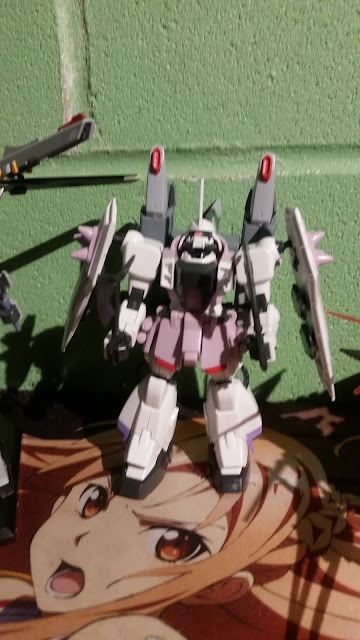 But yeah, the Cerberus Bucue Hound will be my inspiration for one of my mechas. One day I'll write it. One day. But I won't hold my breath. Oh well. 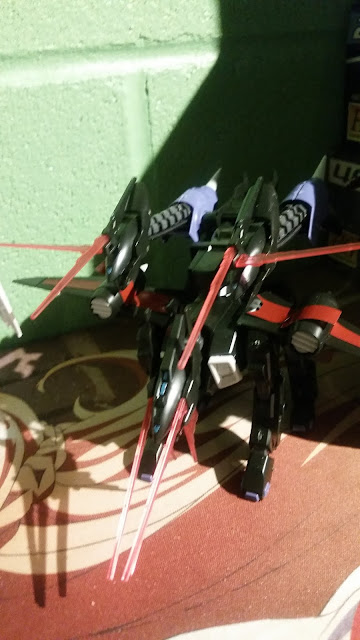 Some progress on building and painting

After I finally passed my preliminary examination earlier this week (I barely scraped through, thank the Emperor), I finally could take a breather and do some Warhammer 40,000 hobby stuff. Phew. So I built an Armored Sentinel so that I can get ready for an Astra Militarum Crusade force (I'm building a Patrol Detachment and supporting my Leman Russ tanks with a single squadron of three Armored Sentinels), and even got a Platoon Commander. Okay, he's supposed to be a Company Commander, but my HQ slots are all filled up with Tank Commanders, and I plan to have only a single Infantry Squad (because I only want tanks). They will load up in my Vendetta gunshop if I ever have enough points for the damned thing. In any event, he's going to lead my Infantry Squad in capturing objectives or something.

Here's a closeup of Colonel Duke. He's a Catachan, but he got saved by my Draconians after he single-handedly took out a...uh, Dark Eldar Archon who hunted his entire squad down and skinned them alive in a death world. Okay, I know I'm ripping off Predator, but I couldn't help it.

I also did the Martian Iron Earth for the bases of my Adeptus Mechanicus guys, so my Serberys Sulfurhounds, Kastelan Robots and Thanatar siege-automata all have Martian Iron Earth bases now. Yay. I don't know if we will ever get rules for the Mechanicum automata in 40K, but I will keep praying to the Omnissiah for Forge World (okay, seems like it's the people at the main Games Workshop office who are working on the rules now) to release the rules for them someday. Someday...

I also painted a single Traitor Guardsmen (the rest all came painted, so I only needed to paint one), an Exalted Sorcerer on disc and a Heldrake. The Heldrake was such a pain to paint. Ugh. Fortunately, I'm done since I only need two and I already painted the first one long ago. Was it last month? Wow, time really flies, eh?