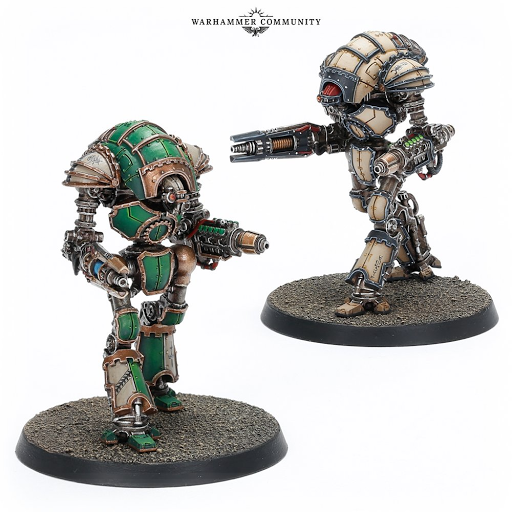 The Cerastus Knight-Atrapos has been announced! Forge World is releasing them and their rules! I'm getting these guys in addition to my Knights Styrix (I need to order those guys soon). I have the 40K version from Forge World, so I want a mini-sized versions of them too so that I can accurately represent my Knight House even in Adeptus Titanicus. You can check the news out on Warhammer Community!

Anyway, what do these guys have? Of course...the graviton singularity cannon! 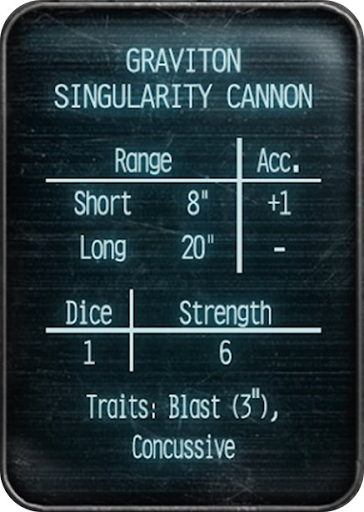 Uh, it's only Strength 6 and 1 shot, though, which is kind of...lackluster. Yeah, you can do Coordinated Strike at potentially Strength 10 but only one shot, but...I dunno about that. That's kind of disappointing, but then again, I guess blast 3" is cool (that means 2 hits if you don't roll a miss?).

Nice to see this rule come into play for Adeptus Titanicus too! Cool! This also combos with the Knight-Atrapos's melee attack, which is exactly what I'm going to field the Knights for. Get in close, smack them with the Atrapos lascutter! Best of all, it's Fusion too! Woohoo! 8 attacks at close range from a banner of 4 dudes, with Fusion, that's gonna tear a Warlord Titan apart, never mind Warhound! And with Macro-Extinction Protocols...yeah, this is gonna be good. 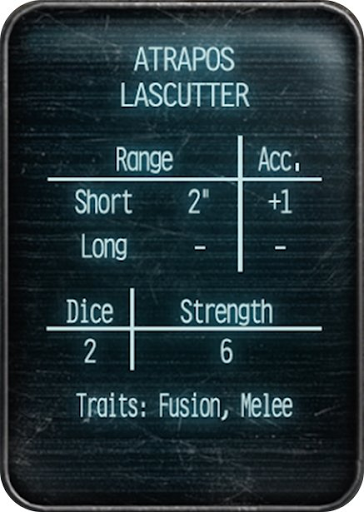 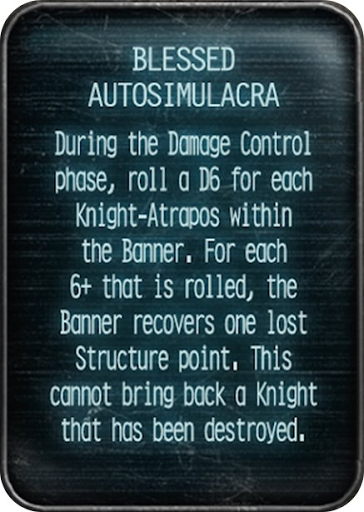 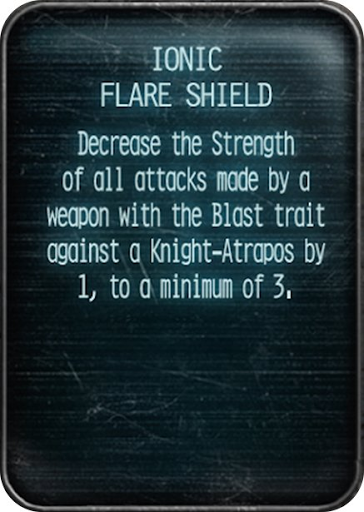 It has the same defensive buffs that the Knight Styrix has, so I'm really looking forward to fielding a small banner of these guys in my Knight Household Army! A Cerastus Knight Lance of Knight Atrapos and Knight Lancers, combined with a Questoris Knight Lance of Knights Errant, Knights Crusader and Knights Styrix! I dunno if we'll ever get Knights Preceptor, but at this point I'm so spoiled by all the Knight choices I don't really care. I wonder if we'll eventually get Armiger and Dominus class Knights? Oh, and don't forget, there's still the Acastus Knight Asterius that they have yet to release. Huh.

Well, we'll see! As for me, I can't wait to expand my Knight Household!

Yup, Warzone Charadon is here. War comes to Metalica, and my Knights of House Yato shall rally to the defense of the venerable forge world. Typhus and his Death Guard company (1st company, right?) shall fall before the might of adamantium, steel and faith. The Imperial Knights of House Yato - and of Draconis III - shall prevail against the plague lords. We will destroy Nurgle's forces and ensure the sanctity of Metalica.

We will bring death to the Death Guard! And we shall drown the Dark Eldar/Drukhari in darkness!

I don't know what new rules we will get for the Adeptus Mechanicus and Imperial Knights (Death Guard and Drukhari also will get new rules), but as usual I'm more interested in the lore. I can't play anyway. It sucks, but with Covid-19 wrecking havoc in the States...yeah. Lockdown and quarantine it is. Damn Nurgle and his stupid plagues. Not fun when it happens in real life, eh? But I'm more interested in the lore, as usual, and I hope Battlefleet Draconis is enough to drive away Typhus's plague fleet and the Terminus Est. Not that we will show up in the lore, but hey, at least I'll have my Knights of House Yato appear somewhere in Metalica to fight off the Death Guard or something...don't worry, our faith in the Emperor will make us immune to whatever plagues Nurgle conjures! 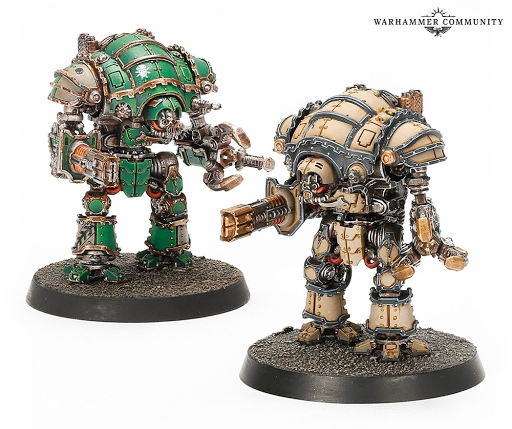 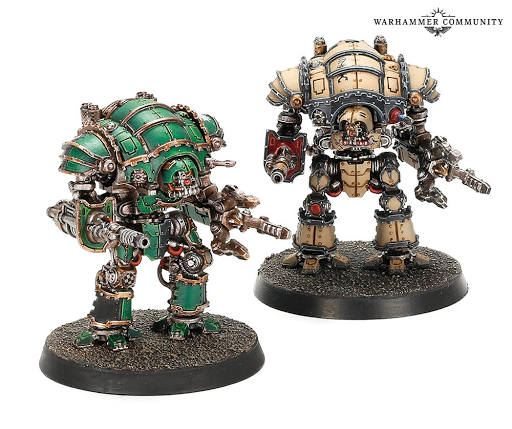 The Forge World Knights are finally up for preorder! Yay! You can go to Forge World to preorder them now! Honestly, I'll just buy them next week because there aren't any bonuses to preordering. Hopefully they don't run out by then...

They come in banners of 2-4, so I'll get a full banner of 4. Oh, and they come with command terminals, so you don't have to worry about their rules. 2 of them cost US$50 (ugh, that's expensive). I'm still getting 4 of them, heh. I love Knights. Now all we have left is the Cerastus Knight Atrapos. 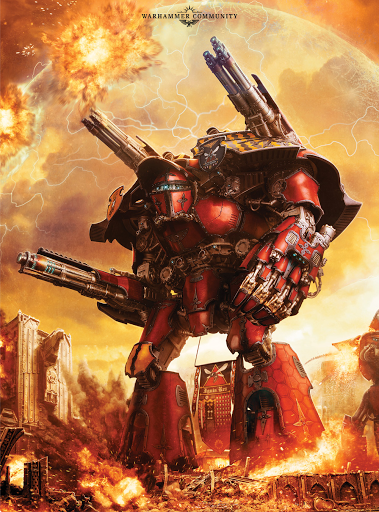 So I got my hands on Crucible of Retribution. I'm not sure what to say, but...well, there wasn't much. They did have some new awesome Titan Legions and Knight Houses in the book. I was particularly taken in by House Moritain, because they have such awesome lore. I mean, scholar-Knights! That's pretty much the same as my Thousand Sons! I also like their Seneschal Traits, which were pretty awesome even if they are a little suitational. No matter, I'll try them out here and there. My Imperial Knights are pretty much samurai Knights, heh, so we'll do the whole Zen and Bushido culture in Imperial Knights, and I think House Moritain's lore captures that perfectly too. Well, when I have the chance, I'll try them out. I'm still waiting for the Knight Styrix, so that I can add a banner of them to my Knight Lance. I haven't given up on playing a Knight Household Army, which I will support with a single Titan reinforcement.

The Legio Trait and Legio Specific Wargear of Legio Ignatum (Fire Wasps) appeal to me too. I'm considering using those instead of making my own Titan Legion Traits from Defense of Ryza, but we'll see. Legio Draconis (Dark Dragons) might be better off having their own individuality, but I can't really think of any of the Legio Traits in Defense of Ryza that appeals to me, other than Elite Magos. We'll see, I guess. I also like Legio Damicium, their Legio Trait and refusal to bow against all odds are awesome. Also helps that they are from Urdesh. I know Urdesh was reconquered by the Imperium and is now a Loyalist world, but did they ever rebuild Legio Damicium? It'll be sad if the Unbroken Lords remain forever broken. Legio Tempestus (Storm Lords) was rebuilt and is now a Loyalist Titan Legion (see Dan Abnett's Titanicus for more details - they relocated to Orestes after the Horus Heresy and took part in the Sabbat Worlds Crusade). But...man, I didn't think Urdesh fell to Chaos during the Heresy.

When the Horus Heresy struck, there was a Cold War of sorts, only for it to erupt into open war when a fleet of Iron Warriors warped in to help Legio Kulisaetai and the Mechanicum Taghmata forces of Kalibrax to conquer Atar-Median. Obviously they weren't going to take that lying down, so they launched a preemptive strike before Kalibrax and their Iron Warrior allies could finish their preparations, securing a swift victory.

Unfortunately, the three traitor Forge Worlds wouldn't just sit back and watch. They launched an invasion and basically conquered five out of seven systems in the Belt of Iron, thus triggering the Cataclysm of Iron. Needless to say, Atar-Median and Graia, along with the Loyalist elements of Legio Venator, fought back and reconquered the systems, driving the Traitors out. The Traitors refused to go down without a fight and resorted to scorched earth tactics, often nuking or virus-bombing the holdings they were driven out of, turning entire planets into radioactive or toxic wastelands. Ugh. That sucks.

In any event, Valia-Maximal, bearing a grudge against Graia, sought to conquer Graia and its empire. Meanwhile, the remnants of Legio Venator, assisted by Legio Atarus and the forces of Atar-Median returned to take back Arachnus and its moons from the Blackshield traitors who prematurely declared their independence. Before that, they joined up with Legio Ignatum to bring Urdesh to heel and ended up annihilating Legio Damicium, breaking the Unbroken Lords. While recapturing Arachnus and subjugating Urdesh, Graia was somewhat forced to fend for itself, but they managed to fight back and attempted to conquer a line of bastion planets standing between them and Valia-Maximal. They failed most of their attempts, only succeeding once. As for Kalibrax, the oppressed had enough, and insurgents revolted, throwing a massive fleet that overwhelmed their orbital defenses and even allowed them to capture the orbital defence platforms. Without Titan Legions to support them, they contented themselves with blockading Kalibrax and awaiting reinforcemens, which would eventually come during the Great Scouring. As for Graia, they suddenly found their route of conquest opened up when the Traitor forces mysteriously disappeared. Invading the line of planets all the way until Valia-Maximal, they found that the Traitors were all...gone. Weird. No one knows what happened to them.

Oh, and there's Jerulas Station, which nobody knows what happened to it either. It got invaded by either a Blackshield force or xenos, for when Urdesh sent a research team down to investigate, two-thirds of their fleet got blown up. Ouch.

So it ends in an Imperium victory, but as always, it's a pyrrhic one. Because grimdark. At this point, it's hard to take the whole grimdark, pyrrhic victories seriously because that's all that happens. It's becoming pretty predictable and grinding at this rate. But okay. Still several mysteries and loose ends that never got tied up, like what happened to Valia-Maximal? Where did they all disappear to? What about the Protectorate of Unsubdued Steel? Did they get reconquered by the Imperium? And who's ruling over Jerulas Station right now? Lots of questions, no answers. Oh, well. I guess we'll find out in the 41st Millennium.

For now, I'll just await my banner of Knight Stryrix...and eventually Knight Atrapos. Speaking of which, House Col'Khak is pretty cool too, being founded on Atar-Planitia, sort of a sister world to Atar-Median. So they are subordinated to Legio Atarus and the Forge World of Atar-Median (seconded to the Mechanicum Taghmata forces there). Cool!

Speaking of which, is there really a difference between Skitarii and the Taghmata Omnissiah? I'm starting to think Taghmata is an umbrella term that basically emcompasses the Skitarii as well...like, why on Holy Terra/Mars would they separate the Skitarii from the Taghmata? That makes no sense. Even the Legio Cybernetica is part of the Taghmata. Do we still use Taghmata for the 41st Millennium, or do we just call them Adeptus Mechanicus Battle Congregations and Maniples? Ugh. As much as I love the rich lore of both the Horus Heresy and Warhammer 40,000 proper (as in properly in the 41st Millennium), sometimes they make things overly complicated.