After the successs of my Knight Household Army 2 weeks ago, I went into battle hoping to repeat the same tactics...or at least have fun, but it turned out that it was not to be. 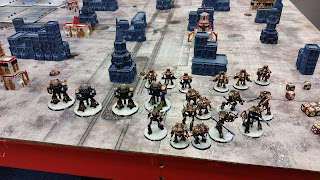 Anyway, this time, we ended up playing in a Hive City again, with uneven ground (apparently the ground shifted beneath the Titans' feet), with the primary mission beinng Secure and Hold. That means 4 objective markers, all within 18" of the center, but must be more than 6" away from each other. The deployment zone was a strange L shape lined against the side of the table, and...I think my opponent got virus payload or virus bomb for his secondary objective while I chose Quadrant. Not that it mattered, because...well, you'll see. 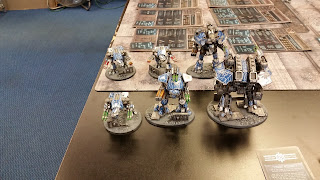 Despite getting first turn, I only passed 2 of my orders, Full Stride for my Imperial Cerastus and Questoris Knight Lance and First Fire for one of my Acastus Knights Banner. I failed the rest...and that was the beginnng of my misfortune. My opponent essentially brought a Precepts (?) Maniple, which featured 2 Warhound Titans in a squadron, a Reaver Titan with a melta cannon, a Warlord Titan with volcano cannon, and a Nemesis Warbringer Titan with quake cannon. He had a single supporting Warhound Titan outside the maniple with a plasma blastgun. While I failed my 3rd command check, the Warlord got his First Fire off. 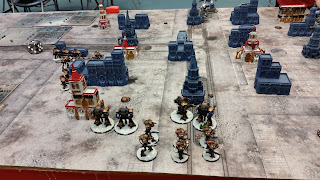 Right at the start, he destroyed one of my Acastus Knight banner - the one who passed the First Fire Command Check - with a direct hit from his volcano cannon, scoring 2 critical hits. Boom. Instant death. I didn't even get to fire first.

I tried to run my Imperial Knights up while my Mechanicus Knight rounded another corner, but the Acatus Knights got hit by the quake cannon and were shaken. Nonetheless, my opponent still somehow managed to get my Knights in his line of sight and he wiped out my Knights Errant banner with the Reaver's melta cannon, scoring another few critical hits. Ouch. The Mechanicus Knights heavily damaged the Warhound that was carrying the payload, bringing down his void shields, and then the Acastus Knights damaged it to critical condition, though they failed to kill him because I rolled poorly despite getting 6 hits in with the magna lascannons. Damn. The Warhound retaliated with his maximal fire plasma blastgun and destroyed a Knight Styrix banner. Ouch. 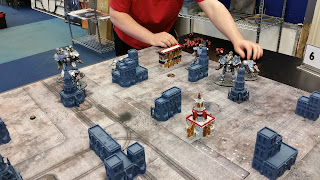 The Warlord Titan, because of his Swift Hunter trait, spun around and fired his volcano cannon, scoring a direct hit and several critical hits. All my Cerastus Knights Lancer and Questoris Knights Paladin were wiped.

In just the first turn, I only had 2 Acastus Knights Porphyrion, 2 Cerastus Knights Atrapos and 2 Questoris Knights Styrix left, I didn't even kill a single Titan (just critically wounded a single Warhound). It was clear that I was done. There was nothing I could do, he'll probably just take out my Acastus Knight banner with his volcano cannon next turn, and maybe continue to wreck my Mechanicus Knights with a Reaver, 3 Warhounds and a Nemess Warbringer Titan. There was no way I would be coming back for this one. 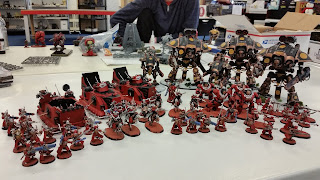 In other news, my Adeptus Mechanicus army is mostly complete. Just waiting for the Skitarii Marshal now, and maybe a second Archaeopter...if I ever get one. I hope. We'll see. But seeing my Skitarii and Imperial Knights march together, with Cybernetica reinforcements, that's just so cool! I'll get another picture, and soon! Once my second Archaeopter is complete, of course. We shall see!