I managed to try out my first 9th edition game today. Both my friend and I probably made a lot of mistakes, not having played in a very, very long time, and trying to make sense of the new rules and secondary objectives. So we probably screwed up a lot (there was a funny moment when it turned out my friend brought 2,450 points worth of Space Wolves by mistake, but we mitigated that by me taking an additional Knight Preceptor). 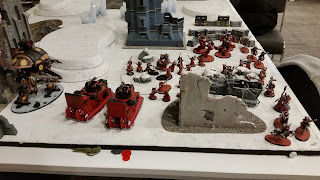 Oh, I should talk about our armies. My friend brought Space Wolves, which included a Wolf Lord (upgraded to Chapter Master) in Terminator Armor, 7 Terminators with power axes, 2 drop pods filled with Blood Claws, a Rune Priest (I think? The Librarian, basically), a Wolf Priest (the Chaplain, I think), Longfangs with 5 lascannons, Bjorn with plasma cannon, a Leviathan Dreadnought with dual storm cannons (relic), 3 Predators with lascannon sponsons but Predator autocannons, and Aggressors. He actually brought Hounds of Morkai, but ended up not fielding them because I didn't bring my Thousand Sons army. I wanted to practice and familiarize myself with Adeptus Mechanicus, so I brought them instead.

Facing against the Space Wolves were my Skitarii. No Marshal yet, so:

I added a second Knight Preceptor with Stormspear rocket pod later when it turned out that my friend went over by 450 points. Nothing to worry about, it's just a friendly game. It didn't last 2 turns, with us quiting after 1 and a half turn. 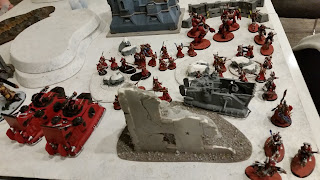 We played the 4th mission, No Man's Land, which was to secure and hold objectives. Hammer and Anvil Deployment, I believe? I don't know what happened, but I deployed my whole army first and then my friend did, and then he got first turn. I'm pretty sure we were supposed to alternate between units, but whatever. We were just doing this for fun, and this saved time.

So my friend dropped a couple of drop pods behind my lines, spilling his Blood Claws out and killing just 2 Skitarii Rangers. His Rune Priest cast a spell to give them cover save, and it was his spell that did the 2 mortal wounds to my Skitarii Rangers. Then the shooting phase. Most of his damage went to my Knight, who took all the shooting from his three Predators, the Leviathan Dreadnought, the Longfangs...and even with Rotate Ion Shields, he went down to 10 wounds without dying. Phew. My friend had selected Titan Slayer as one of his secondary objectives so he was banking on killing my poor Knight. He didn't like my Serberys Sulfurhounds (he literally said that, ha ha), so he shot them with all the Blood Claws' bolt pistols, but he only took a couple of wounds off them, so all of them survived. I think he also took about 3 wounds off one of my Skorpius Disintegrators.

Oh, my Forge World dogma is the customized one I had, the Data-hoard Forge World, so all my vehicles have Feel No Pain. My Skorpius vehicles and Kastelan Robots benefited from that, and they get to heal a wound at the start of my turn!

My turn came, I wiped out his Blood Claws with my Kastelan robots first bathing them in flames and then charging into combat and bashing them with their fists. My Skitarii Snipers killed the Rune Priest with their transuranic arquebus, with me scoring a mortal wound and doing 3 damage with D3 damage. Woohoo! Uh, I think I killed all but 3 Blood Claws in the 2nd squad, while the Kastelan robots took a bit of damage from the Chaplain (though the 6+++ Feel No Pain helped mitigate it). I took off 6 wounds from one Predator thanks to my Knight Preceptor while the other Knight Preceptor whiffed all his shots (he was wounded, I rolled 2 1s for his las-impulsor). Oh, and I killed the Wolf Guard Terminator in the Long Fangs squad with my unwounded Knight Preceptor. All my Serberys Sulfurhounds ran foward, as did one of my Skitarii Ranger squads with the arc rifles, who advanced 6" and got into an Objective. The Skorpius Dunerider with my Skitarii Vanguard also moved to claim another Objective, so I had 4 out of 5 Objectives. Other than killing the Blood Claws and the Rune Priest, I didn't do much, there wasn't much shooting or combat, so...yeah.

Fortunately, I scored big on Objectives, getting 1 point for the central objective (I chose the secondary objective for the No Man's Land mission), scoring 3 points for Battlefield Supremacy because Domination was my other Secondary Objective. Yay. That's 4 points.

For Canticles, I rolled Litany of the Electromancer AGAIN (I got it for the first battle round, but as you know, there was nothing to do there). Funnily enough, I actually rolled a 6 for my Kastelan robots locked in combat with the Chaplain and dealt 3 mortal wounds to him. Wow. Just...wow.

My friend then destroyed my wounded Knight in the second turn, but he had to put everything he had into him, all three Predators and the Leviathan. The Knight didn't blow up. Oh, he Deep Strike his Terminators and Chapter Master right behind the wounded Knight for some reason. Oh, well. The Long Fangs fired their lascannons at my unscathed Knight...only to do a total of 3 wounds to him. Heh. I think the Skorpius Dunerider took a couple of wounds from a plasma gun shot, but saved one with the Forge World dogma, as did the Kastelan robots, who proceeded to pulverize the Chaplain and 3 Blood Claws who recklessly charged them in combat. The Aggressors moved forward and killed 2 of my Serberys Sulfurhound guys in one of the 2 cavalry squads, but 1 survived to claim the Objective (not that it mattered because my Skitarii Rangers were on there too). Despite being 12" away, my friend rolled an 11 twice for his Terminators and Chapter Master to get into combat with my surviving Knight Preceptor and brought him down to...13 wounds, I think? I can't remember.

We sort of stopped the game there because it was getting late and we were out of time. My friend scored 10 points for Titan Slayer and 5 points for the Primary Objective. On the other hand, when it came to my turn, even though I didn't do anything, I gained a whooping 15 points for the Primary Objective in the Command Phase alone. I held more Objectives than my friend, I held 1, and I held 2. So that's 15 straight up, taking me to 19 points. Not to mention, I would have gained another 2 victory points for holding the center objective and another 3 for Domination via my secondary Objectives, bringing me up to 24 victory points.

However, that was only because the game stopped at turn 2. I don't know if my Skitarii would survive another round of shooting. My friend still had 3 Predators, Bjorn, a Leviathan Dreadnought, Longfangs, a bunch of Terminators and Aggressors, while I was one Knight down and one very wounded (he would get all 15 points for Titan Slayer soon). So yeah. I don't know what to do, man. If the game had gone on longer, it was likely that my friend would win, destroying all my battlefield assests (like the Knights) and crush me completely. Oh, well. We'll see. I guess playing to the mission is still best. Right?

That was a good practice game, and I can't wait to play with my Adeptus Mechanicus and Skitarii again! And Knights! I wonder what news they have for us tomorrow, at Warhammer Festival. We'll see, I guess. I'll let you know when I get more news soon!