I built a second Archaeopter! Yay! 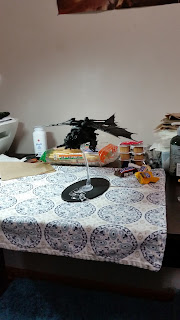 The logic behind my Skitarii is that I have most of everything comes in pairs. So 2 squads of Skitarii Rangers with 2 arc rifles, 2 squads of Skitarii Rangers with 2 transuranic arquebuses, 2 squads of Skitarii Vanguard with 2 plasma calivers, 2 squadrons of 3 Serberys Sulphurhounds, 2 Skorpius Disintegrators, and now 2 Archaeopter Stratoraptors too! How will they work out? I have no idea. We'll see on Monday. Hopefully they will put up a better fight than the poor showing on Friday. Well, I win some, I lose some, and it doesn't bother me none. Rather, I'm pumped up and looking forward to the rematch, eager to test new lists. I'm the stubborn type who would rather try again and again until I find the winning formula, so I don't mind losing. Even for Adeptus Titanicus, I'll be more than happy to try my Knight Household Army again. Perhaps I'll tinker with my list here and there, add a Titan as support rather than rely totally on my Acastus Knights, but I don't know. We'll see! For now...yeah. I have no idea, so I'll focus on my Adeptus Mechanicus instead! 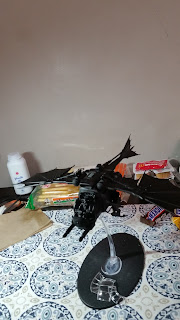 Oh, and I have a Rogue Trader Tournament tomorrow, Incursion at 1,000 points, at Phoenix Games. I hope I'll be able to make it. Apparently it's Best Coast Pairings or ITC organized, so I'll probably get my ass kicked - and kicked very hard - but I'll do my best. As I said, no hard feelings, and I don't mind losing. I'll just do my best and hope the Emperor watches over me. What will I bring? That will be a secret, of course. Heh. You'll find out when I write a battle report tomorrow...hopefully it doesn't involve another one-sided thrashing, but we all live and learn from our mistakes. At least I hope I will!