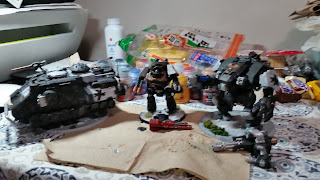 Phew, that was one hell of a Friday. I managed to paint my Skitarii. I realized that 5 of them have not been based (or I didn't paint their bases), so I quickly painted their bases. Whoops. Of course, just like all my other Skitarii and Adeptus Mechanicus forces, I used Martian Iron Crust to paint their bases. Woohoo! Now they look complete! 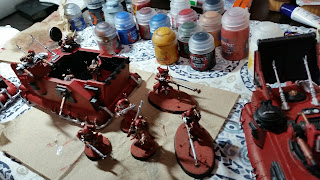 I also painted a third Skorpius Dunerider. As you probably already know, I have 2 Skorpius hover-tanks, which I magnetized and I can swap between Dunerider mode or Disintegrator mode. Most likely I'll keep them as Skorpius Disintegrators, so I got my hands on a third Skorpius Dunerider to ferry my Skitarii around. That would help me out a lot. I traded the Eradicators (because I was sick of painting Black Templar infantry) and a single Redemptor Dreadnought for the Skorpius Dunerider and Kastelan robots. Phew. Was it worth it? I don't know. Turns out I might not need the Kastelan robots (I already have 4) so I might just sell them off in future. I don't know. We'll see. 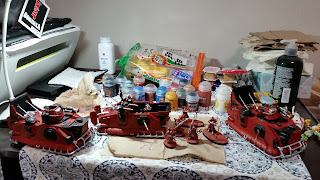 But while I was sick of painting Black Templars infantry, vehicles are another thing. I enjoy painting vehicles, they are so much easier to paint! Probably because I don't have to paint like 16 of them in one go or something. So I painted my remaining Redemptor Dreadnought, my Contemptor Dreadnought and my Impulsor. Now they look really rad! I think. Better than before when they were Grey Seer (except for my Contemptor Dreadnought, who was mostly black and gunmetal silver). Now I'll have to paint my Repulsor Executioner next, which is...not exactly a very enjoyable task, to be honest. Nah, it's all right, I'll give him a shot. 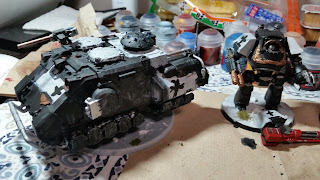 I don't know what I'm going to do with my Black Templars. I don't really play Space Marines and I would rather play my Imperial Knights and Adeptus Mechanicus. From Warhammer Fest, it seems we will be getting Fire and Magic, which means I can finally dust off my Thousand Sons. 9th Edition hasn't been kind to us, and so I haven't touched my Thousand Sons in a while. Well, mostly because of Covid19, and not because I keep up with the meta. I would love to play my Thousand Sons in future, but I'm more invested in my Adeptus Mechanicus for now - I mean, I have all these new units from Engine War that I'm dying to use but I can't because of Covid19 again. Ugh. Anyway, we'll see! 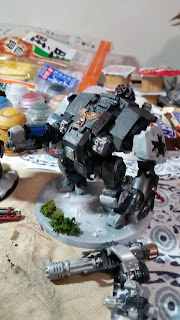