After the untimely demise of 1d4chan, I am attempting to put together at least some bits of tactica here and there. I know the tactica is precisely the main draw of 1d4chan, so like the Magos Explorator of the Adeptus Mechanicus I am, I will attempt to recover the lost knowledge and scraps of data. Obviously, most of my focus will be on Imperial Knights and the Adeptus Mechanicus (or Mechanicum in Horus Heresy). Ave Omnissiah!

Well, this particular post will be dedicated to the Questoris Knight Crusade Army List. For the last couple of years, every time I participate in a Horus Heresy campaign (the latest one being the Janus Campaign), I bring an Imperial Knight army. Ahem...I mean a Questoris Knight Crusade Army. The reason is simple. Because I don't have any other Horus Heresy models. Well, strictly speaking, actually I do have a couple of Magos Macrotek and their servo-automata, I have 20 Secutarii Hoplites (which don't count as compulsory troops because I don't have a 28mm scale Titan), and a bunch of battle-automata in the form of 4 Castellax-Achea battle-automata (which I'm running as regular Castellax battle-automata with Darkfire cannons), 2 Thanatar siege-automata and a single Vultarax stratos-automata. I could technically use my Tech-priest Dominus or Cybernetica Datasmith as an Archmagos Dominus and form a minimum-sized Horus Heresy army, but I don't have enough models to form a proper army. Like, okay, that would be 1,545 points. Not enough to play a Horus Heresy game.

But Knights...now that's a different story. I love my regular 9th Edition Warhammer 40,000 games (I'm very different from most Horus Heresy players in that regard, the majority of them seeming to swear off 9th edition and focus solely on Horus Heresy), and my Knights allow me to have my cake and eat it. I can freely swap between them in Horus Heresy and the 41st Millennium 9th Edition without needing to make any major adjustments. Best of all, they are magnetized, so if there's no Knight Preceptor in 30K? Easy, I'll swap his arm for a thermal cannon or rapid-fire battle cannon. Or make him a Knight Crusader!

That is one of the best strengths of a Knight army - you can play them in both 30K and 40K without needing major model changes or weapon swaps (it's hard to play a 30K Space Marine Legion in 40K, even if you go entirely Firstborn, especially with volkite weapons missing and all the special units, and obviously Primaris Space Marines aren't in 30K, nor are Centurions and a lot of stuff). Hell, even Imperial Militia and Cults are hard to convert between 30K and 40K. I can't use my Leman Russ Executioner tanks in 30K, and if I go Solar Auxilia, I can't take sponsons. Just...wow. So Knights it is. And I haven't even brought up the Mechanicum problem that has been plaguing us. WHY AREN'T WE GETTING 40K RULES FOR MECHANICUM ROBOTS AND UNITS?! I love my Cybernetica models. I really do. But it hurts to see them on the shelf, unable to play them in 40K. I could theoretically play them in 30K and I intend to do so...eventually. But I'll need a lot of new Mechanicum models to make up the shortfall, which isn't compatible with my Adeptus Mechanicus army. It baffles me that the Skitarii show up frequently in Horus Heresy lore and novels (Mechanicum, Cybernetica, Master of Mankind and Know No Fear being many of them) but they just don't show up on the tabletop because there simply are no rules for them! Apparently the Road to Terra Podcast is doing beta rules for the Skitarii, but right now they're still fixing errors that I've pointed out to them, and they have yet to update it. Maybe they'll update and upload a new version once the new Adeptus Mechanicus codex comes out, and they can add the Skitarii Marshal to their ranks. I hope. I'll write an article on it one day.

Giant robots piloted by the most badass, noble dudes in the Imperium. Okay, you have Traitor Knights who are...well, not so noble, and you have ruthless Mechanicum overlords who command tyrannical houses of Knights such as House Malinax (the archenemy of my House Yato).

Their rules are fairly simple. You don't have to worry about the Vehicle Damage Table, so no crew stunned or shaken. Only thing you have to worry about is losing D3 hull points on an Explodes! result, but that's about it. They Move Through Cover, they are super-heavy walkers, they can fall back and shoot and charge, they can fire their weapons at different targets (but you can only charge at a unit you fired at least one of your weapons at). They can stomp! Also, the robots have beaten the kaiju! So if Tyranids do somehow show up in the 31st Millennium (courtesy of the Pharos machine in Sotha), you'd want a Household of Knights on your side.

Also, they pack heavy firepower, have easy access to Strength D weapons, are fairly sturdy (though your opponent can still easily take them down with enough anti-tank weaponry and Haywire - I lost like 6 Knights to Iron Havocs with Tank Hunter). Some people claim they are unfriendly, but hey, make sure your opponent knows what they are facing and allow them to tailor their list, and it should be a close battle. Even if you're facing a load of anti-tank, you still stand a good chance of winning as long as you know how to use your list well. Knights are strong, flexible and durable. They might not be as durable as in 40K (24 Wounds is a lot better than 6 Hull Points, and an all-round 5++ invulnerable save is sometimes better than 4++, plus there are no Strength D weapons in 9th edition), but they certainly pack a punch and can stomp your opponent to the ground if they are unprepared.

You can roll on the table when determining Warlord Traits for your Knight Seneschal.

1. Hell Rider: In the first turn, your Knight Warlord and all Knights within 12" of him gain +1 to their Movement, and +1 on To Wound and Armor Penetration rolls. Sweet! Allows your Knights to move faster and their ranged weaponry become deadlier. It'll be hard to pull off a charge on Turn 1, but even so, weapons like thermal cannons and rapid-fire battle cannons would benefit a lot from this.

2. Glorious Renown: Your opponents get -2 penalty to their Leadership tests when taking Fear tests against your Knight Warlord, while your allied units within 12" may re-roll failed Morale checks. It's okay, I guess? Should be good for Imperial Militia allies.

3. Favored of Mars: Choose one of your Knight Warlord's weapons to be Master-crafted. Nice. House Taranis rides again! Also very useful on a Reaper chainsword or Strength D weapons.

4. Lord of the Abyss: The Knight Warlord gains Monster Hunter and Adamantium Will. Would be great if you have more Monstrous Creatures running around in 30K, but I guess it works well against Mechanicum robots (ouch, Legio Cybernetica lists had best watch out) and maybe Primarchs?

5. Pussy...ahem, I mean Puissant Commander: Add +1 to your Seize the Initiative roll, and opponents' reserve rolls suffer a -1 modifier. Pretty good, especially in missions where your opponent has lots of units in reserves. Also helped me seized the initiative when I rolled a 5 (by the Emperor's grace, I got this Warlord Trait during one of the Janus Campaign missions). Hah!

6. Indomitable: It Will Not Die. My personal favorite. Nothing like seeing the look on my opponent's face when I tell him my Warlord just gained a hull point after rolling a 5+. 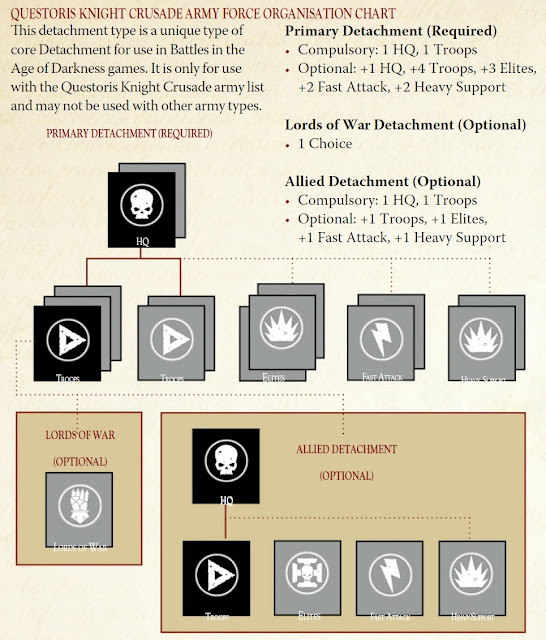 Fellow Warriors
- Dark Angels
- Emperor's Children
- White Scars
- Space Wolves
- Imperial Fists (you would think House Taranis would be buddies with the other siege warfare Legion, not to mention their close proximity to Mars during their defense of Terra)
- Night Lords
- Blood Angels
- World Eaters (they eat up any technology they find, and those they can't swallow, they break. Damn Khorne worshippers)
- Ultramarines (basically House Terryn)
- Death Guard (well, they're also obsessed with the death of flesh)
- Thousand Sons (psychic powers and robots don't match...cough Castellax-Achea...cough)
- Word Bearers (freaking Traitors)
- Alpha Legion (don't know what they're thinking)
- Imperial Army
- - Solar Auxillia: A great idea if you need bodies on the table, especially since you're lacking a lot of models whenever you play Knights. Claiming Objectives would be easier with them.
- - Imperial Militia and Cults: Very flexible allies with a wide selection. You can make pseudo-Skitarii with a combination of Survivors of the Dark Age and Cyber Augmented! Throw in lots of cheap, expendable soldiers as bodies, if that's your fancy, the way you spam Solar Auxillia Lasrifle sections, and again, tanks! They also have a Malcador if that's what you want.
TACTICAL DISCUSSION
Er...I don't think I'm qualified to talk about this. I mean, I did okay with a pure Questoris Knight Crusade army during the Horus Heresy campaigns I participated in, and I can tell you one thing. If your opponent isn't prepared, it'll be one-sided. If your opponent is prepared, then it won't be one-sided. You just need to adjust the facings of your Knights to make sure they tank the most devastating hits on their ion shields. Be careful of Strength D weapons, they can really ruin your day, but unless your opponent rolls 6s on the Destroyer table, which is unlikely, don't be overly afraid of them.
Against other vehicles, Knights excel in close combat. Between Strength D close combat weapons and Stomps, you should have no trouble clearing tanks and infantry. Be careful of Terminators with power fists and armorbane weapons. And one thing you must beware of - haywire. If your opponent is spamming haywire, keep your Knights far away from them or you'll have a really bad day. You'll realize that 6 hull points aren't enough, especially against haywire.
Make no mistake, Knights are incredibly strong in 30K, but they are by no means invincible. Fellblades, Shadowswords, Fellglaives, even Titans (Warhound Titans) and other Knights exist in great numbers during the Heresy, and a single Primarch or Terminator squad with armorbane weapons can ruin your day. Drop pods filled to the brim with meltaguns and combi-meltas would also be killers, and Iron Havocs and other support squads (basically 30K's version of Devastators) armed with lascannons, missile launchers and Tank Hunter will wreck your Knights, even with ion shield saves. Sometimes it's a good idea to charge them across the table and stomp on them with your titanic feet. Or lock them up in combat so that they can't shoot.
Don't be afraid of Price of Failure. Unless you bring a Titan along with your Knights (you might as well play Apocalypse by then), you don't have to worry about Price of Failure because your Knights don't count. So if your opponent is trying to claim 4 extra victory points for killing 4 of your Knights, nope. That's not how it works. Do remind him that in Blood Feud, he does get extra victory points for destroying Super-heavy walkers, so the game is balanced even with Knights in it.
So that's basically all I have for you guys. Thanks for reading, and if there are any changes I need to make, please let me know.