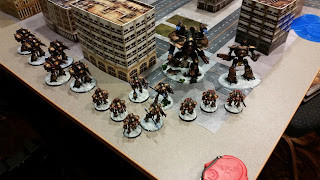 Well, as usual, I've come up with my homebrewed Titan Legion, Legio Draconis. Also known as the Dark Dragons, their home is in the forge world of Draconis IV. They usuually comprise of battle Titans, such as Warlord Titans and Warmaster Titans, as well as the three Imperator Titans - the Shogun's Will, the Rising Sun and Amaterasu. They are usually painted in black and gold...no, they have nothing to do with the Black Legion. Their crew, meaning the Princeps and Moderatii, are recruited from Draconis III, so expect Japanese names for them. Yeah. Anyway, they eschew Scout Titans completely, mostly because they have a vassal Knight House to do the scouting for them. What a Warhound Titan can do, the Knights can do better, or so the Princeps of Legio Draconis reason anyway. Most of the material used to otherwise manufacture Warhound Titans go into constructing more Knight suits for House Yato and their branch House Kanda instead. The core of the Titan Legion is composed primarily of Warmaster and Warlord Titans. 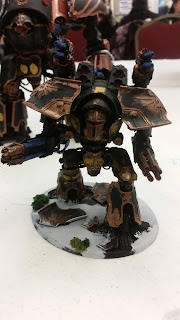 The Dark Dragons also draw from a wealth of expert tech-priests to care for their Titans, and this is represented in their Legio Trait, Elite Magos. Also, the Titans of Legio Draconis are also Masters of Defense, allowing them to fire upon enemy Titans and Knights charging upon them. The Princeps of Legio Draconis tend to be on the more cautious side, unwilling to gamble with the lives of their crew and engines, so they always have Power Reserves as a contingency...and what do you know, that's their Legio specific Stratagem. Honestly, I was torn between Plasma Rifling for their Legio Specific Wargear (which makes sense, given their heavy reliance on plasma weaponry) and Crusade Banners (because of their heavy reliance on Knights), but it makes no sense for cautious Princeps to be pushing their reactors. So Crusade Banners it is. 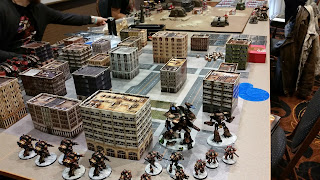 They participated in the Horus Heresy, fighting on the side of the Emperor against the traitor engines of Legio Mortis in particular. But because their numbers were never big, they didn't lose much. They didn't participate in the battle of Beta-Garmon, for example, with the bulk of the fighting left to House Yato instead. They did take part in the Crusade of Iron, helping the Ultramarine Legion fight off Legio Audax and other traitor Titan Legions in the realm of Ultramar. They also stood in defense of Terra against Legio Mortis during the siege. 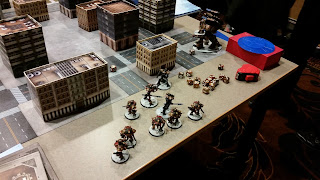 Thanks to that, they didn't suffer many losses and Legio Draconis remained strong for the next ten thousand years. They never really became a major Titan Legion, not with so few numbers, but the Dark Dragons remained vital to the defense of the Imperium - in particular the three hundred worlds of the Draconis Coalition. They continue to stand strong, towering over the Knights of Draconis III and reclaiming the lost worlds in the aftermath of the Great Rift. As of yet, they have not met any real threat to their immense firepower, but all that might change...especially since there are rumors of Legio Mortis looming over the horizon... 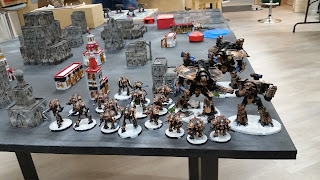