I finally painted my Bladeguard Veterans and Tartaros Terminators for my Black Templars! I also painted my Captain in Cataphractii Terminator armor as well. Oh, not to forget my Primaris Techmarine as well! I'm not sure if you can see him, but he has a Templar Cross on his shoulder pad and knee. 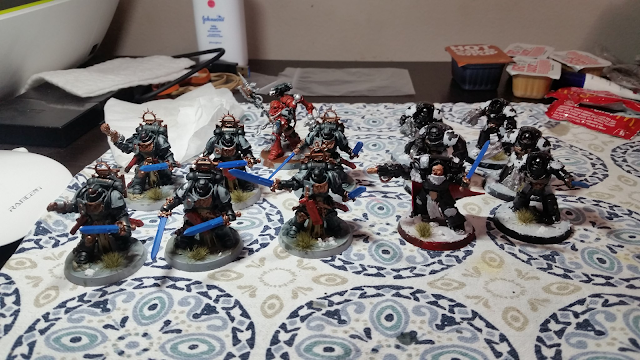 Yeah, I screwed up the Templar crosses. They are so difficult to paint. I suck at painting. Oh, well, at least they are done and I have my very own Black Templars. Yay. I have nine...yeah, nine Bladeguard Veterans. I'm planning on making a single three-man squad and a six-man squad. Then I'll stuff them into my Impulsor and Repulsor Executioner and have them charge straight into the enemy. 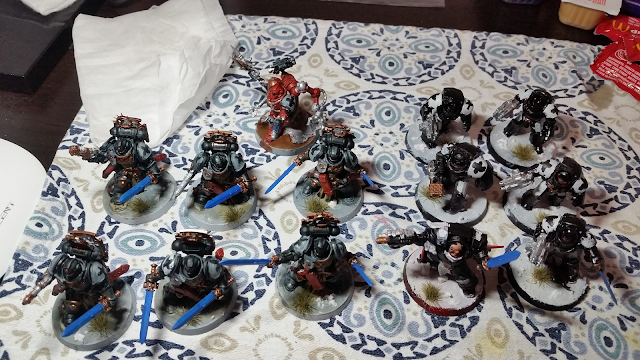 I'm having second thoughts regarding the all-gravis armor Space Marine army. Maybe I'll just sell the Aggressors and Eradicators. I need the money for a new Stormblade, after all. We shall see. I might prefer to focus on my Adeptus Mechanicus and Astra Militarum armies instead. My Knights are pretty much done, but I still need a Stormblade for my Imperial Guard...and a Skitarii Marshal and maybe a few more Skitarii for my Adeptus Mechanicus army. They're coming up with rules for the Skitarii Legions in Horus Heresy - done by Road to Terra Podcast, so it's actually fanmade. But I might try to build a Skitarii army around those rules. Again, we'll see. I'm not sure how it'll work out, but obviously it'll be a combination of Legio Cybernetica and Skitarii, since I have plenty of battle-automata.

But to do that, I'll need the funds. So...I might just sell the gravis armor instead. I already have my Black Templars, after all, so...yay?