This section is for the fluff of the Taghmata Omnissiah. I will not be typing out the whole book - if you want to read the whole thing, please buy the book from Forge World. The Horus Heresy series, Mechanicum: Taghmata Army List can be found on the Forge World website (just click on the link). Rather, I will be writing a series of pages that includes a summary of the fluff, analysis of the units similar to 1d4chan. I might accidentally rip them off, so I apologize in advance, but I will try to stay as original as possible. 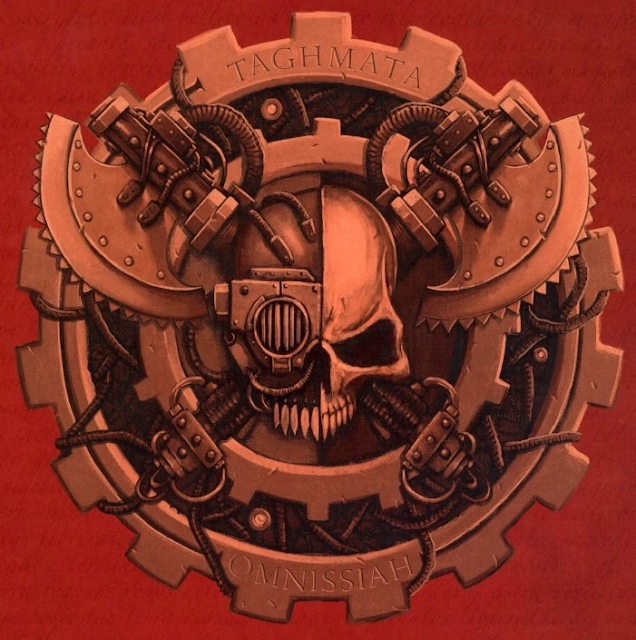 The Taghmata Omnissiah is the principal type of operational military force of the trans-Martian Mechanicum, and its largest. Divided into a feudal structure, where each individual Forge World operates automomously as its own domain, but submtis to the overall power of Mars, even the Forge World themselves were further broken down into forge cities, colleges, legions and hives. Each organization would then weave a complex web of alliance and interdependence. Each Forge World was an empire in itself, harboring Magos and Archmagos that rule these individual segments and command terrifying armies of machines and battle-automata.

A Taghmata is basically formed by combining the troops of each Magos under a single Archmagos, the latter assuming overall command and authority over the Magos and other tech-priests who had sworn their loyalty or forged alliances with him. Each Magos has their own resources, secrets and armies, these smaller cohorts jnown as Taghma becoming the building blocks of Taghmata. The Magos usually specialize in different tactics or armies - some focus on tanks, some command the war machines and battle-automata of the Legio Cybernetica, others found purpose in mustering the combat doctrines of the Myrmidons, and many eccentric Magos found themselves breaking away in Explorator fleets.

It was this fragmented structure that saw countless Magos steadfastly staying true to the Loyalists' cause, or turning upon Terra as they sided with the Traitors during the Horus Heresy, having been promised by the Warmaster freedom to engage in whatever dark research they wished to pursue.

The Mechanicum is divided into the following:

Titan Legions who unleash the wrath of the God-Machines upon the foes of the Emperor. They form a parallel military society to the Mechanicum, with both relying on each other - the Titan Legions for repair, maintenance and construction of their war machines, and the Mechanicum the firepower, protection and strength. Giant robots! Epic Titans! Wrath of the God-Emperor unleashed!

Similar to the Adeptus Arbites on Terra, this Machine Cult persecutes errant priests who indulge in techno-heresy. HEREEEEEESSSSY!

Our beloved Tech-Guard! The Skitarii are not members of the priesthood and exist as its own sub-cult under the Mechanicum, maintaining entirely separate structures of organization and tactical deployment outside of the Taghmata. I told you they were a completely different organization from the Mechanicus, didn't I?

The construction of void craft and interstellar vessels fall under their jurisdiction. It's also the Mechanicum fleet (and continues to exist as the Mechanicus fleet in the 41st Millennium under the same name, Basilikon Astra, because Games Workshop and Latin). We're flying through Space!

Questoris Knights, piloted by nobles of Knight Worlds who possess their own culture and traditions, but rely on the Mechanicum for support. Mechanicum's own Gundam models.

Why not just say Fabricator-General?! The Mechanicum version of the Planetary Governor.

The Holy Synod of the Lords Magos

A title to sound impressive, but basically the bunch of dudes who are high-ranked and rule over everyone else in their own Machine Cult and Forge World domains. The highest is the Archmandriture, or Chamber Cardinal (something like the Ecclesiarchy's Cardinal, but with more machine parts than fat - though they both have the same shiny bald heads and long robes, except one is red and the other is white), followed by the Archmagos, the Magos Majoris and the Magos Ordinary. Time to climb up the ladder of Martian priesthood, aspiring adepts!

Militant sub-cults of the Mechanicum who usually serve in a command position. And die horribly in the field as you charge a horde of screaming Orks.

Why is this separated from the Legio Cybernetica? No idea.

This is where your Macrotek Magos comes into play. They are in charge of Enginseer Covenants, Tech-thrall Combat Units, Macro-Machina, Ordinatus Locum and Technographica Determinus (basically intelligence, for those who don't understand Latin). The repairmen. Yay.

The Mechanicum's counterpart of the imperial Munitorum, providing munition, wargear, servitors, drones and stuff to the Taghmata service. Let's hope they don't screw up as much as their imperial counterparts. They're also the human resource - we're now accepting applications for servitor roles!

Bio-modified troops such as the Adsecularis Modified Troops (The Rite of Pure Thought, Induction Chargers and Revenant Alchemistry), labor units, Bio-alchem Cadres, Tech-Priests in charge of them, and Cyber-hybrid Carnivora. Sounds cool, especially now that we have models for them in the form of Serberys Sulphurhounds and Serberys Raiders! Basically cyborg horses that breathe fire. They...also serve as human resource - this time we're accepting applications for indentured laborers and Tech-thralls!

...wait, what? There's no such thing in the Mechanicum? They show up only in the Adeptus Mechanicus? You mean they didn't exist in the 31st millennium?

Along with these myriad organizations, Tech-priests and Magos can specialize in their own fields and studies, known as Techno-Arcana. Basically, your diploma if you're an adept, your degree if you're a Tech-priest, or a PhD if you want to be a Magos.

The amount of techno-arcana is just staggering. Here's a list for you aspiring adepts.

Hesphestari - I have no freaking idea, I can only guess that it's based off Hephaestus, the Greek God of blacksmiths, sculptors and craftsmen, so if you think about it, it makes sense that these guys build weapons and stuff.

Provender - food, biostuff, I guess they recycle waste matter into food, or manufacture food and necessary nutrients. Sorry, been reading too much Mars trilogy.

Explorator - this is what I want to be if I'm a Magos. Sorry, I got influenced by Omnid Torquora from Tech-Priest. Basically, we go out exploring the universe in search of treasure...uh, knowledge in the form of STCs, relics, xenotech and archeotech. You can see why this is my first choice...

Genetor - Genetic engineering, they're where the Magos Biologis work and create all those fancy experimental creatures and chimeras. Mad scientist galore.

Vulpaxis - no idea, but I do know Vulpa means fox. I don't the Mechanicum bothers with foxes though, unless they're trying to bioengineer a 30K Vulpix. YAY! Warhammer 30K x Pokemon! But that should be under Genetor, right?

Lictanex - Linguistics and communication experts. Sing those litanies and get into the groove, adepts! Xenos scum don't speak no Gothic and the holy Binharic, after all.

Dominus - Lord. Well, lord of the Legio Cybernetica, if the Taghmata Army List is of any indication. Operator of our favorite battle robots.

Cordantor -  er...what? In charge of bonds and stuff? Bonds from everyone being gears and cogs in a great machine? I suspect they are in charge of Martian philosophy or something, the dudes who sit  (if Tech-priests can sit) and meditate until they find new insights in the beliefs of their Machine Cult. Who knows?

Mhalagra - the Arbites...I mean the Prefecture Magisterium Magos, I think. Charged with enforcing the doctrine of the Omnissiah and executing the heretics. Or heretek because it sounds cooler and we need the heretech in there.

Alchemys - Aspiring alchemists. You all know what alchemy is, right? If you don't, allow me to introduce you to a fabulous manga titled Full Metal Alchemist...

Myrmidex - Myrmidons! Combat, battle doctrines and a million ways to die gloriously. Pair them with Myr tokens from Magic: The Gathering to spawn infinite Myrs. Speaking of which, Mirrodin counts as a Forge World, right? Someone ought to write a crossover...

Lachrimallus - The dudes in charge of Tech-thralls and other Mechanicum laborers, aka Mechanicum slavermasters and overseers. Ever wonder why your Adsecularis Tech-thralls are so awesome? Yup, it's because of these guys. Repeat after me! Rite of Pure Thought...

Please feel free to correct me or contribute suggestions, criticize me, point out mistakes, etc. in the comments below. Let's make this a useful page for Mechanicum fans!