I managed to participate in another Rogue Trader Tournament on Saturday, titled the Summer Startup Munera! RTT. Sorry, I meant to write this battle report (though the term is pretty generous, considering the length and lack of details) on Sunday, but I was too exhausted and I had stuff to do, so I only ended up writing it today. Anyway, 3 rounds, 2,000 point matches, using the Grand Tournament book - Missions 11, 12 and 13, Strike Force. Here we go!

Before I get too carried away, I should write out my list. I used an identical list to the one I used in WaaaghFest, which is basically:

And there you have it, my melee-orientated Adeptus Mechanicus list! Except for the Knight, I guess. Oh, right. I thought I should let you guys know - so in this RTT, we decided that the Knight of the Cog counts as Mechanicus, so I got the +2 Command Benefits for having a Super-heavy Auxiliary Detachment that shared a Keyword with my Warlord. Phew. That helped me out a ton, and I'm happy with that. Anyway, I fielded this list and got crushed...more on that later.

The first match was Retrieval, and my opponent from Renegade brought Grey Knights. I can't remember what he had, exactly, but I believe he had one Grand Master, a Brother-Captain, a Championn, an Apocethary in Terminator armor, 5 Paladins, 3 10-men Strike squads, a Stormraven and a Dreadknight. I think that's it? Surprisingly...I thought he would have more models than that, but it is what it is. 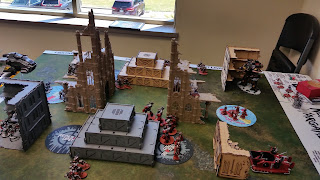 My first game went well. My Knight Castellan blew up his Stormraven in the first turn alone, while my Serberys Raiders charged in, hit with all their melee attacks AND wounded with all their melee attacks. That's 7 hits and 7 wounds. Holy Omnissiah. My opponent and I couldn't believe it. With that, they wiped out a combat squad of Strike Grey Knights by themselves. I think he managed to fight back and killed all of my cavalry, but somehow my random positioning of my Knight Castellan, infantry and a Skorpius Dunerider prevented him from deep striking his Paladins in my deployment zone, with only the Apocethary making a Dynamic Insertion in the second turn. My Ruststalkers, who used the Circuitous Assassins Stratagem to pop up in his deployment zone...failed their charge and then got wiped out by the Grand Master. Meanwhile, his Dreadknight and psycannon Grey Knights took out my Kastelan robots, but not before my Kastelan robots did heavy damage to his Dreadknight and wiped out like 10 or so Strike squad dudes. On the other side, my Serberys Sulphurhounds also killed another couple of squads of Strike Grey Knights before they were finally wiped out, and my Knight Castellan eradicated the Apocethary with his twin meltaguns. The Paladins came in, killed my Skitarii Rangers to grab my objective, but my Knight wiped them out in shooting, so my second squad of Ruststalkers had nothing to charge at. Whoops. Um, hilariously enough, my Cybernetica Datasmith survived a charge from the Dreadknight and killed him with a power fist. No, really. He actually won combat against a Dreadknight with his power fist...though, to be fair, the Dreadknight was already heavily wounded by the Kastelan robots earlier. Still funny, heh. 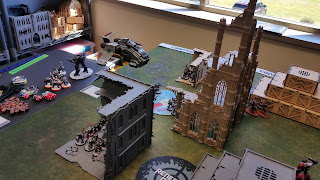 By the end of the game, I think my opponent only had about his Grand Master left, his Brother Captain killed by my Ruststalkers (I think), and his Brotherhood Champion? I can't remember if I killed his Captain or Champion, but it was one of either. Maybe he had a couple of psycannon dudes left. But yeah, I managed to win the game 87 to 60 or so, it was quite close. Still a pretty good victory, considering. Yay! 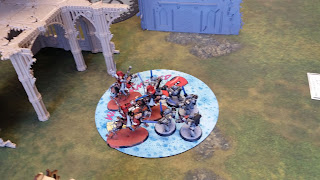 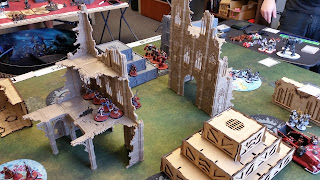 Scorched Earth. This was where it went downhill for me, heh.

My opponent was Drukhari or Dark Eldar this time. I was looking forward to playing against Drukhari because I heard about how powerful they were, and I couldn't wait to test my mettle against them.

As it turned out...nope, I am nowhere good enough to challenge the sadistic space elves...

I can't remember what my opponent's list was, but he had Drakzhar or however you spelled his name, at least two Succubus, some Hellions, some Scourges, and a lot of Kabalite Warriors and Wyches. I think he also had at least 5 Raiders (or was it 7?), and 2 Venoms. 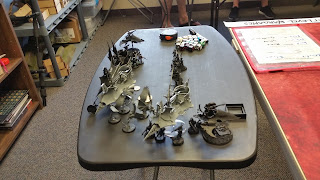 Highlights of the match...um, I blew up all of his Raiders thanks to my Knight Castellan. There was one time where my Serberys Raiders and Sulphurhounds charged up the table and locked the Venoms and Raiders in combat, only for my opponent to fail to kill a Serberys Sulphurhound Alpha for about 3 turns and he ended up slaying the Venom in melee. Heh. Arc maul! I also wiped out the Scourges with my Serberys Sulphurhounds, but my Sicarian Ruststalkers got wiped out by his Succubus. No kidding. How did just one freaking model wipe out an entire squad of Skitarii assassins, I had no idea, but there we go. The Wyches then charged up the battlefield and tore my entire army apart. My Kastelan robots managed to kill some of them, but it wasn't enough. My second Sicarian Ruststalkers fared better, killing Wyches, but then they got killed by another group (I think). Ouch. Sigh...I got out-meleed by Drukhari, despite using the Ryza dogma. Damn. 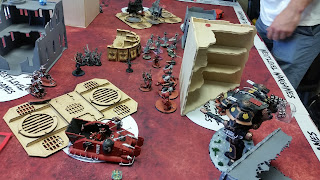 In the end, my Knight Castellan was the only model left on the table. My opponent just couldn't kill him, and while I managed to wipe out quite a bit, it wasn't enough...my opponent had all the objectives and I only had one giant model. At least my Knight Castellan survived, so moral victory there, heh. All hail the Knights!

Can't remember the score, but I think my opponent had like 90 over points to my...30 or so. Ouch.

This time, it was a mirror match, where my opponent used a Lucius Adeptus Mechanicus army against mine. No Knights, though. Well...I'm the Knight guy, after all. He played a horde army, so he had at least 2 or 3 20-man Skitarii Rangers and Skitarii Vanguard squads, plus a few 10-men squads, I think. He had 6 Troops, basically. What else? Um...a 5-man Serberys Raiders, 4 Ironstrider Ballistarii (divided into 2 squadrons of 2), 2 Skorpius Disintegrators, a Tech-priest Manipulus and Tech-priest Enginseer, a Skitarii Marshal, 5 Sicarian Infiltrators, 10 Sicarian Ruststalkers, and I think that's about it? I can't remember, sorry.

The mission was Vital Intelligence, by the way.

The first turn went well for me, and I took out a big chunk out of one of his 20-men Skitarii Ranger squad, while the Serberys Raiders raced forward and killed a few in melee (their galvanic carbines did nothing). I also killed 3 of his Serberys Sulphurhounds and annihilated his Sicarian Infiltrators, so it looked promising.

Then he turned the tables on me.

I think his Ruststalkers charged up and killed all but 1 of  my Kastelan robots - along with shooting from his Ironstriders Ballistarii, while his Skorpius Disintegrators killed one squad of my Vanguard to move me off that objective. There was a lot of back and forth where I killed quite a bit of his infantry, but he would take out my units, wiping out my Serberys Sulphurhounds and Serberys Raiders. Before I knew it, he had destroyed all of my units except my Knight Castellan...again. Meanwhile, my Knight Castellan slowly wiped out his Ironstrider Ballistarii before taking out his Skorpius Disintegrators, but with only one model left, I couldn't complete any objectives. Damn it! He couldn't kill my Knight Castellan with the infantry he had left, no matter how hard he tried. Hah! Another moral victory, at least. So my Knight Castellan managed to survive all three games...though, admittedly, I got hammered on points. Again, I lost by a huge margin, managing about 30 points or less. Damn. 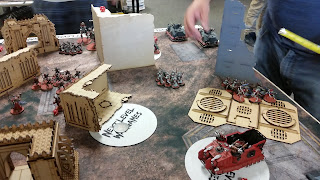 Huh...oh, well. Seeing that my Knight Castellan survived all three matches, in the next tournament, I'm going to bring more Knights. I'm going to flood the table with more Knights, keep them back and someething. I don't know. We shall see. I'll be bringing two Knights Preceptor and 4 Armigers for the next game, allying in Kastelan Robots. So I'll have like 8 Toughness 7 models and 2 Toughness 8 models, with 124 wounds between them. We'll see how they will fare next week or so!