My name is Ignatius. I am a Sorcerer of the Thousand Sons Legion. To the unenlightened who fall under the tyrannical reign of the Imperium, they would most likely not have heard of my Legion, for our history has been erased from the annals of history the moment we were declared Excommunicate Traitoris since the dark days of the Horus Heresy. 10,000 years have passed since then, and even though it has been torn asunder and miamed by the great betrayal of the Warmaster, the Imperium has survived. It has endured. It has...forgotten. 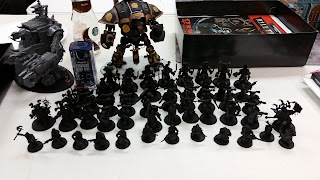 But I remember. I have been around since the days of the Great Crusade, the moments of unprecedented triumph, where humanity stamped its supremacy upon the stars. Though most of those years have been lost in the Warp, where time flows differently within the bowels of the Eye of Terror, and the temporal rifts of the Planet of Sorcerers - our new home after the destruction of Prospero - are in constant flux - my memories of the darkest days of fighting remain unblemished.

I was there when the Emperor issued the Edict on Nikaea to outlaw our research into arcane lore and the mystical arts.

I was present when the Wolves arrived to raze Prospero, and I was among those who fought desperately on the embattled streets of Tizca, forcing the Emperor's Excutioners to pay vast amounts of blood for each inch they took.

I was one of those exiled along with Ahzek Ahriman, having collaborated with him to cast the Rubric in an attempt to save our Legion...only to damn them for eternity.

I was here on Prospero, when our father recalled all of the Exiles of the Legion to reunite with him, in order to rebuild the forces of the Thousand Sons and carve out our own empire in Imperium space. Even now, the Crimson King continues to gather more of his lost Sons to him, and restore our once great military strength through both material and Empyrean means.

Magnus...has changed. He is no longer the benevolent Primarch I remember him to be. To be fair, I am in no position to condemn him. After the Imperium betrayed and turned upon us, we were forced to be fugitives...renegades...criminals who were hounded every step of the way during the Great Scouring. Even those of us who did not participate in the Siege of Terra were judged as Traitors, sentenced to death by the ruthless and vengeful Imperium. Circumstances dictated that we change. That we adapt. In order to survive, I have done things that I am not proud of. I will admit to having commited atrocities, to consigning entire populations of innocent Imperial citizenry to their deaths just so I can prolong my own life. And in doing so, I have delved into esoteric lore and forbidden magic. At times, I have pursued knowledge over the lives of innocents.

Not that there are any innocents. Not in the Imperium. Not in the galaxy rife with war, xenos and the twisted schemes of dark gods.

However, I still strive to make the best of what I have. Unlike the other Legions who have devolved into brutality and indulged in mindless slaughter, slaking their desire for vengeance upon the bloodied corpses of their enemies, I would like to believe my Legion above that. We are not seeking the destruction of the Imperium. We do not massacre and miam for entertainment's sake. I do not hold a grudge against the Imperium that turned its back upon us. It is beneath me.

We of the Thousand Sons seek to enlighten the ignorant. That is the path we have sworn to, even before the Heresy, and the only path we continue to pursue until the end of time. Let the other Legions gorge themselves on genocide and vengeance, death and destruction. We are above them. We are scholars, sworn to facilitate Change, to expand our knowledge, and seek to improve ourselves better.

In that, I am in full agreement with Magnus's plan to elevate humanity into a psychic race and lead us all to fulfill our full potential. When we awaken, none in the galaxy can stand against us. Not the frenzied greenskins, the perfidious eldar, the nascent T'au, or the ravenous Tyranids. Even the ancient Necrons will crumble against the our might. Humanity will ascend. We will transcend all the other races and climb to unprecendented heights. By harnessing and wielding the powers of the Warp, we will attain...perfection. We might even become a race of Gods, surpassing the Old Ones, whose reign was once unrivaled in the Galaxy.

The other Legions...the other myriad factions of Chaos who worship the other dark gods, they must be made to understand this as well. If they stand against us, we shall force them to submit. None can stand in our way, not even the Despoiler. In their efforts to see the galaxy burn, and bring the Imperium low, they fail to see the bigger picture. They fail to understand that the citizenry of the Imperium should be enlightened, not exterminated. They are the key to the future...the conduits through which humanity manifests its psychic might. If the other Legions continued to wallow in their ignorance and bar our goals, then we will destroy them as well.

My name is Ignatius. I am a Sorcerer of the Thousand Sons Legion. And I am here to appeal to you, to open your eyes to the future and embrace your psychic potential. In order for humanity to not just survive, but prosper in this hostile galaxy, we must cast off the shackles of ignorance and accept the light of enlightenment. The Time of Great Change is upon us all, and it will be a waste to squander the latent abilities locked deep with your soul. That you are able to hear my voice is proof of your wondrous gifts. Gifts that are to be celebrated and recognized, not persecuted and dreaded like you will be if you choose to remain in the Imperium.

The way to Prospero is open, and the Crimson King welcomes you. Throw aside the yoke of the oppressive Imperium, join us, and you will become so much more.
Posted by Tanaka Tomoyuki 田中友幸 (Real name: Tobias Fong) at 2/22/2020 11:39:00 PM