After a long while, I managed to get another Adeptus Titanicus game again! Yay! With Shadow and Iron out last week, we wanted to try the new stuff from it, such as the Nemesis Warbringer Titan. Too bad neither of us had the Psi-Titan, though, but...hey. As long as it works. One day I'll get the Psi-Titan, but with current limited funds and other commitments, it might be a long time. Not to mention it's still out of stock iin Forge World, so no go. For now. 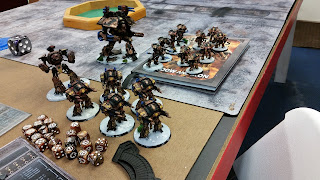 Anyway, we had two games. My opponent brought two maniples - first was the Regalia where you have 2 Warlord Titans and 1 Warhound Titan, and they can merge void shields when 3" away from each other. The second was the Nemesis Warbringer Titan with 2 Warhound Titans, both of whom act as spotters for him, so he can indirect fire with his weapons and only scatter D6" instead of D10. Pretty neat. The Warbringer had 2 volcano cannons and a single Mori quake cannon, the Warlord Titans had 2 Belicosa volcano cannons (1 each), 1 had a Mori quake cannon while the other had a macro gatling blaster, and the long-ranged one had Apocalypse missile launchers while the other had Vulcan mega-bolters. I think the Warhounds also had similar weapons, 1 had 2 turbo laser destructors, 1 had a turbo laser destructor and 1 Vulcan mega-bolter, and so did the other one...I think. I can't remember. No hellstorm cannons, that's for sure. 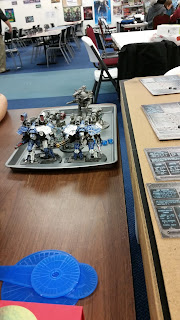 As all I can afford for now is Shadow and Iron, I have no new Titans or Knights. So I went with my usual Household Army, where I had an all Acastus Knight Lance of 5 Acastus Knights Porphyrion (2 in one banner, 2 in another, and 1 in the last one) and a close quarters Knight Lance of 4 Cerastus Knight Lancers in a banner, leading 2 banners of 3 Knight Wardens and 3 Knights Errant. They were reinforced by a single Warlord Titan with Sunfury plasma annihilator, macro gatling cannon and carapace turbo laser destructors.

First game went pretty badly for me. Not only did I fail all my command checks, I lost like 3-4 Acastus Knights from a First Fire from a Belicosa volcano cannon. Eventually, by turn 2 or 3, all my Knights were dead, my Reaver Titan had its void shields down, and I did no damage whatsoever to any of my opponent's Titans. Maybe I plinked off a void shield or 2, or did some damage to the legs, or whatever, but it was pretty one-sided. One of the mistakes I made was clustering all my Lance together because I was worried about Lance coherency. That made them a big, juicy target for the large blast weapons and pie templates...leading me to losing entire lances in a single turn or two. With 2 Titans against 6, mostly undamaged ones, there was no coming back into the game. Especially given that my mission was Engage and Destroy...yup, not happening. Not happening at all.

The second game was a lot closer. I got Hold the Line this time, and this time my Acastus Knights survived longer. My close combat Knights got wrecked again, as usual, and I lost my Reaver Titan. I think in turn 2 or 3...he just blew up because I failed a bunch of void shield saves and the Warhound Titan finished him off with turbo-laser destructors. As for my Knights, I lost 3 Cerastus Knights in the first turn alone, and then my opponent charged his Warhound Titan in. My Questoris Knights destroyed him, but he had a magazine detonation and destroyed my last Cerastus Knight, and a couple of my Questoris Knights. They were then easy targets for the Warlord Titan and Warhound Titan. Fortunately, my Acastus Knights fared a lot better this game, especially since I spread them out this time, to avoid clumping them under a single pie template. I have to thank my friend for his advice and suggestions - a loss is always good, especially since you learn from your mistakes! Despite my best efforts, for the first two turns I only destroyed weapons, which he went and promptly repaired with Emergency repairs, but I took out all the shields thanks to the Acastus Knights' missile pods. I did finally managed to destroy a single Warhound Titan and a Warlord Titan in turn 3, but he had another Warhound Titan bearing down on my poor Acastus Knights. My opponent rolled poorly and he didn't managed to destroy any banners, just individual Acastus Knights - so I was left with 3 banners of 1 each. Fortunately, I destroyed 2 Warhound Titans in the last turn to hold the line and win the game, but over half my army was dead. He might have gotten a few more points if he rolled lucky with the Belicosa volcano cannon shots and stuff, and destroyed just another Acastus Knight or two, but fortunately they withstood whatever the Warlord Titan and Warbringer Titan threw at them. I couldn't touch or hurt those two, unfortunately, but since I only needed to hold the line, that's what I did to win the game. Like I said, it was a lot closer.

Man, Adeptus Titanicus is really fun! Sometimes I just think I should sell all my 40K stuff and go full-blown Titanicus, but I really like my Skitarii stuff and Knights, so I won't. I hope for more games soon!
Posted by Tanaka Tomoyuki 田中友幸 (Real name: Tobias Fong) at 2/21/2020 10:59:00 PM