I built an Ordo Malleus Inquisitor in Terminator armor, and gave him both a Nemesis Daemon Hammer and a psycannon. I kitbashed him out of Grey Knight Terminator parts, Deathwatch parts and...well, just these two. 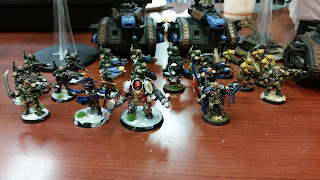 This is like an old throwback to the old Daemonhunters codex in third edition. Instead of Grey Knights, I have Inquisitorial Stormtroopers accompanying my Ordo Malleus Inquisitor. I always preferred Inquisitorial Stormtroopers to anything else, even Grey Knight, so I went with them instead of a Grey Knights army. Of course, I used Kasrkin models because I love the Kasrkin models a lot more than the current Militarum Tempestus line. They just look cooler to me. As you can see, there are three normal Kasrkin squads, and one command squad with nothing but plasma guns. My Ordo Malleus Inquisitor recruits exclusively from Draconis III, drawing upon an entire regiment of Kamikaze Troopers to bolster his forces as they hunt Daemons. 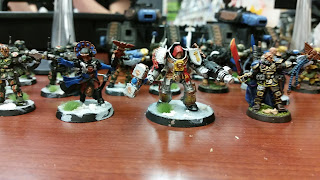 My Kamikaze Troopers, even when not serving in their Inquisitorial Stormtroopers capacity, are equipped with Vendetta gunships. I know they have terrible rules now, but I couldn't care less. I like lascannons so I'll stick to lascannons. Anyway, the Vendetta gunships offer heavy anti-tank firepower, which usually doubles as anti Daemon firepower. After all, even a Greater Daemon would be blasted apart by six lascannons firing in concert. The energy weaponry of the Vendetta gunships also ensure that my Kamikaze Troopers are capable of operating in long missions where they expect to be stranded in the field without receiving any ammunition or supplies. The energy batteries of the Vendetta gunship's lascannons can be easily recharged without requiring ammunition, and thus it is the ideal gunship for operating out in the field for long missions - months at a time, or even years. More so than the Valkyrie assault carriers favored by most Militarum Tempestus regiments. Also, the consecrated lascannons deal more damage to the Greater Daemons that my Ordo Malleus Inquisitor hunts than the limited Hellstrike missiles or rockets from multiple rocket pods. 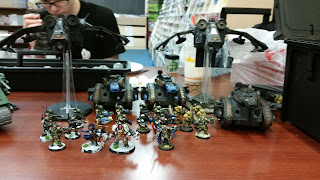 They are led by a Stormtrooper Colonel (generally known as Tempestor Prime if you follow Militarum Tempestus rankings, but obviously I have no intention of doing so). The Ordo Malleus Inquisitor gives him orders, which he then passes down to his troops, but generally the Colonel is allowed a lot of autonomy and freedom to take his own initiative and issue his own commands based on what the circumstances need. He is extremely loyal to the Inquisitor, and will never question the guy, seeing the Inquisitor as the manifestation of the Emperor's authority made flesh.

The Ordo Malleus Inquisitor currently has a single Primaris Psyker in his retinue, a sanctioned battle psyker who he has nurtured and raised alongside him to help fight against the Ruinous Powers. While he is quite clearly a Primaris Psyker, I'm making him an Interrogator. Eventually the psyker will rise to the rank of Inquisitor, but for now he serves as my Ordo Malleus Inquisitor's Interrogator. Perhaps he will have his own Terminator armor when he leaves his master to become an Inquisitor in his own right. 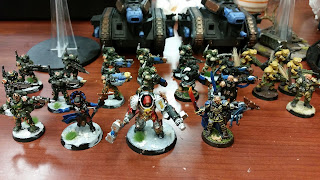 Often, when the Kamikaze Troopers/Inquisitorial Stormtroopers aren't enough to take objectives or require much heavier firepower and more manpower to bring down a Daemonic Incursion, the Inquisition will employ outside help. The Draconian Armored Defenders and their massive tank companies come into play here. As Draconis III is known for its vast arsenal of plasma weaponry, all the Leman Russ tanks in the Draconian armored regiments are almost exclusively Leman Russ Executioner tanks, complete with plasma cannon sponsons. I sold my Shadowsword, mostly because I plan to stick to the plasma theme and get a Stormblade eventually. I would rather stick to my thematic pattern of plasma and field three Leman Russ Executioner tanks along with a Stormblade in a Supreme Command Detachment. That would be much cooler! We also have the much rarer Carnodon tanks, armed with volkite weaponry, but I don't know how to fit that in my list. I'll find a way.

Anyway, this is what happened to my Draconian Imperial Guard regiment! They have undergone quite a lot of changes for their fluff and lore, and while the vast majority of Kamikaze Troopers and Draconian Armored Defenders continue to fight and serve alongside the Knightly nobles of Draconis III, their tanks and gunships strafing enemies alongside the massive super-heavy walkers of House Yato, House Uesugi and House Takeda, a small fraction of their forces is often requistioned by my Ordo Malleus Inquisitor to deal with Daemonic Incursions.

I intend to have him clash against my Thousand Sons eventually. My High Magister in Terminator armor, Ignatius (you saw him in my joke Thousand Sons story) is part of the Cult of Magic, and he intends to summon a bunch of Daemons while helping Ahzek Ahriman on his quest for redemption or to undo the Rubric, and obviously my Ordo Malleus Inquisitor isn't going to allow him to do so. There will be a reckoning, a cat-and-mouse chase...but just who is the predator and who is the prey?

Before that, I should sort of resolve the problem of the forge world...Draconis IV is making plans to invade a Daemon forge world to steal several Knight STCs, and my Ordo Malleus Inquisitor has caught wind of that. He is joining the Mechanicus fleet, though his agenda remains a mystery. Will he be helping the Draconian priesthood in securing the STCs and destroying a good chunk of the Daemon forge world's production lines, or is he seeking something even more sinister and nefarious, an ancient entity that has been lurking for millennia deep within the core of the Daemon forge world, without even the Dark Mechanicum noticing its existence?