Well, this is my Freeblade Knight, Vortigan. I didn't spend any gold and money, so I settled for leaving him in Mechanicus Gray and Runefang Steel. So he looks like that. Yay.

Make sure to check out this game in Facebook Gameroom! Freeblade is finally available for PC!
Posted by Tanaka Tomoyuki 田中友幸 (Real name: Tobias Fong) at 2/27/2017 07:07:00 PM

The Warhammer 40,000 game, Freeblade, is now an apps in Facebook! If you can't play it on your smart phone or tablet, you can now play it on your computer through Facebook's Gameroom!

I've been playing the game for a couple of days now, and ignoring the micro-transactions, ha ha. Yeah, it's free to play, so hop right in and enjoy yourself!
Posted by Tanaka Tomoyuki 田中友幸 (Real name: Tobias Fong) at 2/26/2017 04:23:00 PM

Guess what, folks? Warhammer Community has a post regarding a closer look at the Thousand Sons in Inferno! You can check out their post here.

Dramatics aside ("the Thousand Sons play unlike any other force" seriously? Like...duh?), it seems that the Rites of War for the Thousand Sons are quite fun. You can build an entire army of psykers! Hooray! They have invulnerable saves and all sorts of psyker cults...I'm not very sure, but it seems to draw from the usual disciplines of telekinesis, pyromancy...ah, screw it. Fancy names aside, that's the normal five disciplines. In case you guys don't know what the hell Pavoni, Corvidae, Pyrae, Raptora or Athanaeans mean, they are basically fancy ways of saying Biomancy, Divination, Pyromancy, Telekinesis and Telepathy. Yup, I just solved that mystery for you. You can go ahead and join my Emperor's cult now.

One of the most awesome things is that Contemptor Dreadnoughts can wield psychic powers. You heard that right. The Blood Angels and their Librarian Dreadnoughts are no longer exclusive to Blood Angels! The Thousand Sons have Librarian CONTEMPTOR Dreadnoughts long before those heretics stole our thunder! WOOHOO!

In addition to that awesome psychic Contemptor Dreadnought, we have the Sekhmet or Scarab Occult Terminators, which you guys are probably already familiar with from Wrath of Magnus. You know, the Terminators with a Mastery Level 2 Psyker or Sorcerer as the Sergeant? Yup, they're back. Joining them are entirely new units never seen before, such as the deadly force-sword wielding blademasters of the Khenetai Occult Blade Cabals (what's with the long ass name?) and the so-called expert psi-infiltrators of the Ammitara Occult who you can bet your entire GW armies that they have the Infilitrate Special Rule.

Furthermore, you have the Special Characters, and I'm sure we all remember Ahzek Ahriman, the guy who has an entire series of novels written after him. Speaking of which, I hope I get to read the Ahriman Collection soon. Accompanying him is Magistus Amon, and we have a pre-Daemon Primarch Magnus the Red taking the field!

Tune in for more news regarding the Thousand Sons during the Horus Heresy!
Posted by Tanaka Tomoyuki 田中友幸 (Real name: Tobias Fong) at 2/21/2017 07:54:00 PM

Rise of the Primarch

I shall not fail the Imperium.

Warhammer TV has just released this video, so make sure you watch it! Basically it hints at the Rise of the Primarch, where Belisarius Cawl explains what happened after the Fall of Cadia and the Fracture of Biel-Tan. The Imperium, unable to hold off the Despoiler's Wrath, finds hope in reviving Roboute Guilliman, and they find allies from unexpected places. Some from the dark (Cypher, the Fallen Angel), some from the light (the Grey Knight dude). Basically we'll be seeing a new Imperial Triumvirate in the form of Guilliman, Cypher and Grey Knight dude who we've never heard of before (you would think Draigo gets a new model, but the guy is way too overpowered and Mary Sue-ish thanks to the machinations of Matt Ward...I mean our spiritual liege).

Have fun! And look forward to it!

Guess what, Thousand Sons fans? Horus Heresy Book VII: Inferno will be out soon, and already pre-orders will be available this weekend! That is, 18th February 2017 (in case you're reading this article late).

One of the most anticipated Forgeworld books, or Horus Heresy books, Inferno tells the tale of how Propsero was razed by the ruthless Space Wolves. Executioners and Sorcerers. Apparently Magnus had upset the Emperor with his reckless spell and accidentally wrecked the Golden Throne and stuff, and the Emperor ordered that he be brought back in chains. Horus, being the evil traitor that he is, tricks Leman Russ into attacking Magnus the Red and destroying the Thousand Sons and their world, Prospero. Hence the greatest tragedy of the Horus Heresy begins...

Inferno also includes rules for the Thousand Sons and Space Wolves, the Rites of War for both Legions - if you're familiar with Warhammer 30K or Horus Heresy tabletop game, then you probably know that each Legion has their own unique Rite of War, which is like unique Detachment bonuses that gives them advantages and rules/abilities that tailor to their fluff. Knowing the Thousand Sons, their Rites of War will most probably be psyker based. Look forward to it!

In addition to the rules for the Thousand Sons and Space Wolves, it seems there will also be stuff for the Legio Custodes, Sisters of Silence and even a few new units for the Mechanicum! I'm not sure if I heard correctly, but apparently the Solar Auxillia might also get several new units as well, but that's unconfirmed, so take that with a pinch of salt.

For more information, visit the Warhammer Community page! For the Thousand Sons! For the Emperor! Yeah, at this time the Thousand Sons remain loyal to the Emperor...until the Space Wolves' treachery forced our hand...
Posted by Tanaka Tomoyuki 田中友幸 (Real name: Tobias Fong) at 2/14/2017 01:37:00 AM

The Horus Heresy: Battle of Tallarn

If you guys remember, I wrote a review for Tallarn: Ironclad some time ago, a Horus Heresy novella. I don't think anyone read it, but whatever. In any case, I stumbled across this!

Apparently HexWar Games has been working on the Horus Heresy game, Battle of Tallarn! You can check out the game and pre-order it here if it's your thing. Bear in mind, it's a turn-based strategy game, so more like the Alaric Prime or Sanctus Reach game that I am not going to write about because it only features the Space Wolves and no Imperial Guard. So you and the AI have your turns, you choose an action, then your tanks will shoot at the Traitors.

And unlike Sanctus Reach, Battle of Tallan finally allows you to command the forces of the Imperial Guard! Basically you get to control armored hosts of Leman Russ tanks, Baneblades and Imperial Knights! The Traitors have their own Knights, so be careful. Since you'll be playing as the Tallarn Desert Raiders, one of the more famous Imperial Guard regiments next to the Cadians, Valhallan Ice Warriors, Armageddon Steel Legion, Catachan Jungle Fighters, Death Korps of Krieg (okay, I'm getting carried away here), etc. you'll have access to Leman Russ tanks, Baneblades and Imperial Knights. I think Titans will be an eventuality as well. You'll be up against the Iron Warriors who descend onto the virus-bombed, lethal surface of Tallarn with their Predator tanks, Land Raiders, Contemptor Dreadnoughts, and Renegade Knights of their own. From what I see, they are using the Cerastus and Questoris Knights. The trailer (click on the link above) shows a Knight Acheron unleashing its hellstorm flamer! Awesome!

Okay, okay. I know you have the option to play as Iron Warriors too. Fine. I give up. But as an Imperial Commissar, I'll order you to play as an Imperial Guard tank commander, or I'll put a bolt round through your head. Such heresy will not be allowed. For the Emperor!

Yes, I'm joking. Play whatever you want. It's not like I can warp across the world and shoot you anyway, plus Iron Warrior Contemptor Dreadnoughts are cool. So yeah. Have fun. As for me, I'll be rallying my Tallarn armored regiments and crushing the Traitors with the cold steel treads of my countless Leman Russ tanks and Baneblades! FOR THE EMPEROR! 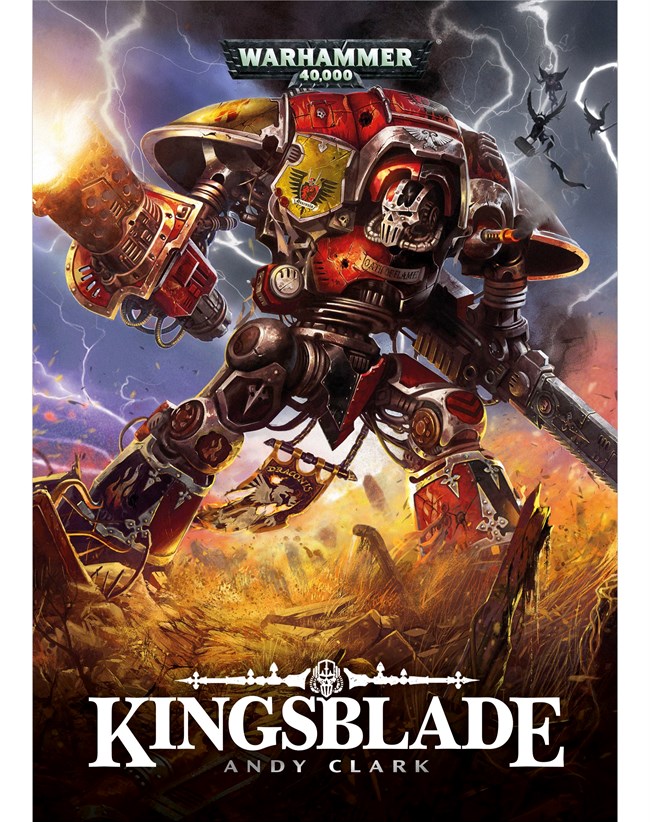 Kingsblade by Andy Clark is here! It has been released by Black Library and is availble through hardback or eBook! The eBook costs $15.99, and I'm getting it once I get my stipend, while the hardback costs a whooping $27! US Currency, because I'm in the United States right now.

THE STORYThe Knight Houses of Adrastapol are both noble and righteous, and when the Imperial world of Donatos falls to the heresy of the Word Bearers, they are foremost in the vanguard to retake it. Led by High King Tolwyn Draconis, the Knights are peerless in battle and strike deep into the enemy’s ranks. But the war soon turns when a terrible tragedy strikes, casting the Imperial campaign into anarchy. As desperation grows, unblooded Knights Errant Danial and Luk must quickly learn the ways of war to prevent an unholy ritual or Donatos will be lost and all the noble Houses of Adrastapol with it.

Get yours today! Or whenever you get paid (because money doesn't grow on trees, and even if they do we probably won't be allowed to pluck them). I'm looking forward to getting my copy once I get my stipend. That said, it'll be on the backlog because I'll be reading The Razing of Prospero first, followed by Guy Haley's superheavy tank books, the Titan short stories, probably Ciaphas Cain and the Sabbat Worlds collection before finally getting to Kingsblade. Or I might just read Kingsblade before I get to the Ciaphas Cain and Sabbat Worlds collection. We shall see.

The Razing of Prospero 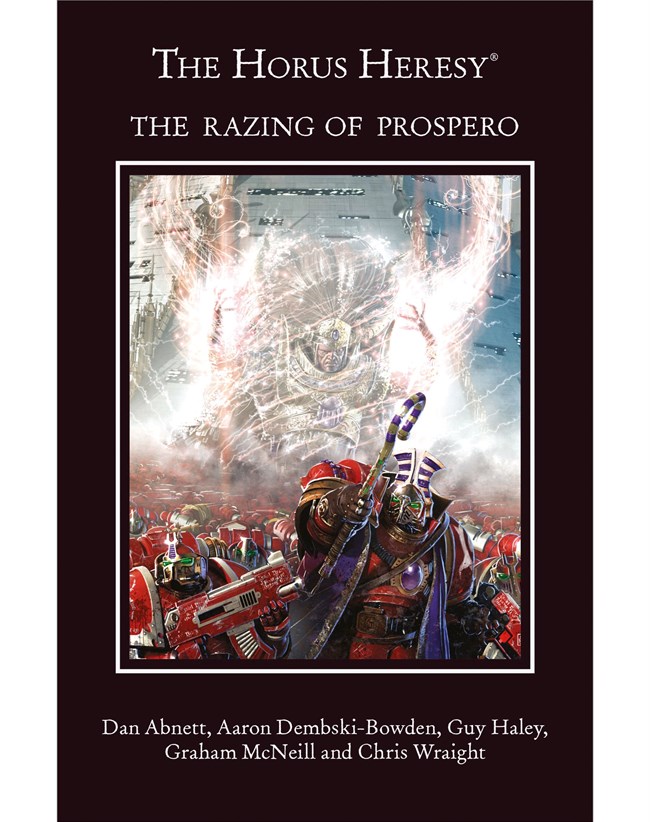 That's right, folks! Look at what I found in my mailbox when I returned home from college today!

My copy of The Razing of Prospero! I can't wait to read it! It has over 800 pages (846 pages, to be specific) of awesome Thousand Son stories! YAY! It has the two Horus Heresy Thousand Son novels, A Thousand Sons and Prospero Burns, by Graham McNeill and Dan Abnett respectively. Then we have 4 short stories, Howl of the Hearthworld by Aaron Dembski-Bowden, Rebirth by Chris Wraight, Hunter's Moon by Guy Haley and finally Thief of Revelations by Grama McNeill again! Awesome!

Ugh, I hate tragedies. Anyway, I'll read this before I start on the Ahriman collection, and I hope I can get a book review...soon. It won't be for another couple of months though, because I still have 3 Warstrider books left to read.
Posted by Tanaka Tomoyuki 田中友幸 (Real name: Tobias Fong) at 2/01/2017 12:17:00 AM